You are here: Home / Hamster Ramblings / Selfies are taking over the world! Or possibly just dominating the Internet. 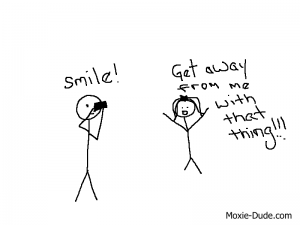 I’m about to get “statistical” or possibly I mean “factual”, but bear with me, okay?

According to a new study by Dove (yes, the “soap people”) over 80% of women feel uncomfortable having their picture taken. When I read this, and while my eyes took in the facts that my mind absorbed, the hamster was busy analyzing:

“WTW?!! How can that be true??? SELFIES – taken mostly almost always BY WOMEN – are taking over the Internet the way that zombies take over the world in The Walking Dead.”

Confused, I turned to a few very reliable sources to conduct my own study. Starting with my moms and my 14-year old daughter, here’s what I noticed . . .

My mom has never liked herself in pictures.

My stepmom accepts herself with grace and a smile.

My daughter needs to authorize the release of any and all pictures of herself.

And what study would be complete without first observing the polar opposite of women? And so I turned to two other reliable sources: my father and my 15-year old son.

My father couldn’t give a rat’s ass what he looks like in pictures.

My son only ever has one concern: that I’ll post his picture on Facebook and write something embarrassing about him. (For the record, I would NEVER DO THAT. At least not until he has a girlfriend.)

And so I now believe that 80% of women do not like their pictures taken – AND I have the evidence to back it up.

As the official conductor of this unofficial study, I declare that we remove all selfies from the Internet.

PS: No women were photographed for the writing of this post. All scientific observations are based on a life-long history of picture taking.

PPS: This may be what killed the Polaroid.