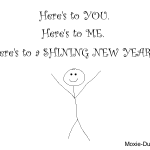 Well, well, awesome readers, Here we are with only a few hours left of 2014. I don’t know about you but for me the year FLEW by like a diverse flock of colourful birds that don’t know where the hell they’re going. To demonstrate the diversity of 2014, here’s a quick recap of my year. […]

Hey there, awesome readers! My friend, The Social Media Fairy Godmother, asked me recently about the best life advice I’ve ever received. The question was part of Manulife’s #LifeAdvice campaign. (Before I continue, I just want to say: isn’t it cool that I can use the words “my friend” and “Fairy Godmother” in the same […] 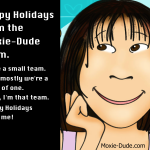 Hey there, awesome readers! Just a quick post to wish y’all a festive holiday season and much health and happiness for 2015. I appreciate every one of you – whether you’re a regular reader or have stumbled upon this site by accident. Also, know that engaging with you on Facebook and Twitter are the highlight […] 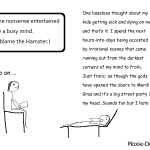 Dear Barbara (because if she’s MY pretend therapist, I LIKE the name Barbara for a therapist – it suits her), I’m hoping that writing about the layer of neurosis that’s resting heavily on my soul will shine some light on it; and maybe even melt it away. I’m hopeful if nothing else. (30% hopeful; 95% […] 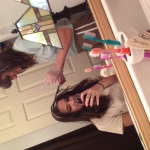 Hey there, awesome readers! When people first meet me they’re always surprised by my age. If you don’t know me in real life, I’m pulling 40. Note from the Hamster: Liar! You’re pushing 50! Then they’re surprised to find out that I’m a mother to four kids – two in their mid to late 20s […]