You are here: Home / Hamster Ramblings / When you notice a sign and it makes you question your own sanity

So there’s this sign. I see it often because it’s on the mirror in the public washroom near my office.

When I say, “I see it”, I don’t mean I actually SEE IT. It’s more like: it’s there and I’m there and we both know we’re there but neither of us acknowledges the other. Kind of like a marriage.

Before I continue let me share it with you … 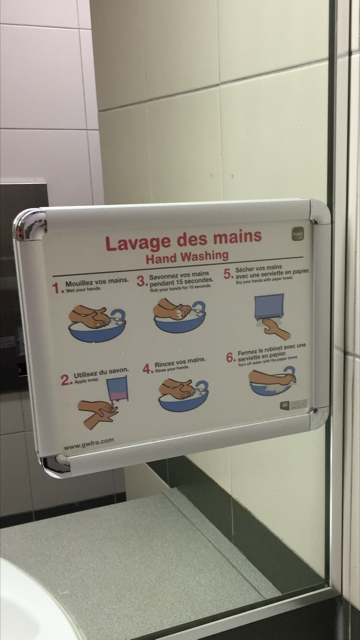 Here’s what happened just prior to taking this picture:

I read the sign. The first vision to pop in the inner theater of my mind was of someone standing at the sink and reading the instructions out loud as they followed the steps.

Meanwhile they’re looking at their face in the mirror, making sure there’s nothing stuck in their teeth; playing a game of ‘lift and lower’ with their eyebrows; lifting their head slightly to make sure there’s nothing yucky dangling from the edge of their nostrils. You know. The stuff we all do. (Right?)

(The Director in my head is from Paris. Don’t judge me.)

Admittedly, I read the sign thinking that maybe I’ve been washing my hands wrong all these years. I thought that maybe – just maybe – reading the instructions would trigger some great dawning about the meaning of life.

But as it turns out, the Director is right.

As I stood there, staring at myself in the mirror, contemplating the ridiculousness of this sign, a black light suddenly turned on in a dark corner of my mind and a memory exploded like popcorn in my head.

The stranger beside me flushed a mere five or six seconds before me and just as I opened my stall door, I caught a glimpse of the stranger’s back as she walked past the sink and exited the washroom, neglecting to wash her hands.

I was appalled. And as though that wasn’t enough, I realized that the stranger wasn’t a stranger at all, BUT MY BOSS (at the time).

I’m about to confess something:

While I “liked” this lady and respected her as my boss, it was at that moment that I lost all esteem for her.

There IS a need for this sign after all. Except I think that the communication is all wrong. We shouldn’t be telling people HOW to wash their hands, we should be telling them that if they don’t wash their hands they will be judged. I’m thinking something along the lines of having to wear a scarlet letter.

Because if you don’t wash your hands YOU SHOULD BE ASHAMED OF YOURSELF.

Is it just me?