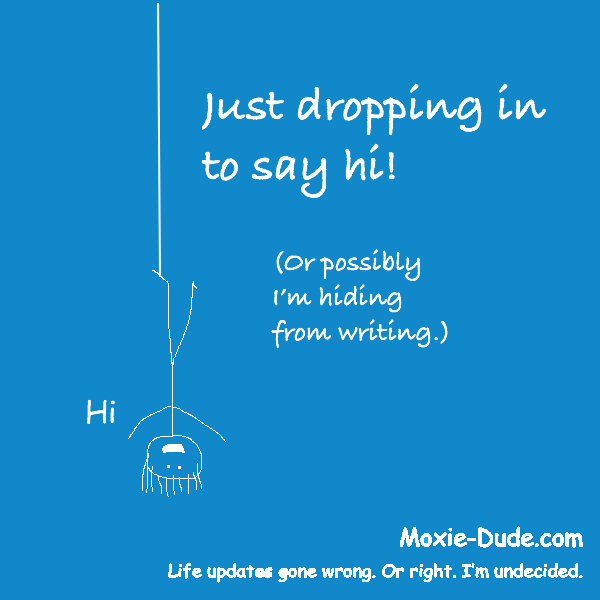 My advice to anyone thinking about becoming a writer?

RUN FOR YOUR FREAKING LIFE.

Although, I will say this: Like semi-precious stones that you find in those woo-woo stores that sell crystals, tarot cards, and dead ceremonial chickens, I believe that writing chooses you. Not the other way around.

So, if you even have an inkling that writing may be a fun career choice, it’s already too late for you. Sorry to tell you this but you’re doomed. And welcome to being the outsider of your own thoughts.

Outsider of your own thoughts, you ask?

Do you remember the first day of kindergarten? The memory may be a blur, like looking at a room full of people through three glasses of wine lined up in a row; still as the guards standing outside of Buckingham Palace. But think hard. I need you to remember because being a writer is kind of like that. Actually, it’s exactly like that.

You walk into a strange room in a big building after your mother has convinced you that “you’re a big girl.” (If you’re a boy I meant boy.)

Through confused eyes and a brain that isn’t yet developed enough to understand, you look around and see other children. Everyone else seems to know each other and your view stops at eye level so anyone taller (the teacher) is a vague haze of blue, polyester slacked thighs. Until she bends down and her head invites you to sit at a round table with a centerpiece filled with crayons and glue and little scissors.

You sit but not because you want to. She’s pretty and you can’t take your eyes off her shiny lipstick smile. Her pink mouth makes you think of the flowered wallpaper in your bedroom.

Maybe if you sit she’ll stay with you. But as you climb into the chair, you realize that she’s a giant and her knees would never fit under the table. At first you thought the chair was scratched-up white but now that your palm has put its weight on it, you realize that it’s a faded green.

Back to you and today and your inkling to be a writer. Can you relate to that first day of kindergarten and how you felt standing as the stranger in the room? Everyone else that seemed to know each other, sitting in groups, talking, coloring, ignoring you … they represent the voices in your head. Remember that because I’ll be coming back to them.

Repeat after me: THE BLANK SCREEN IS NOT YOUR FRIEND.

And since we’re on the subject, do you know what else isn’t your friend?

Sorry. I’m not yelling at you. It’s just that if our sense of accomplishment was left up to first drafts you, me, Stephen King … we would have all jumped off the Golden Gate Bridge by now. Judge, jury, executioner. We are them, they are us. Those are the voices in our head.

Here’s something that I encourage all writers to write across their bathroom mirrors:

Or, said more eloquently by your inner rebel:

But all this talk about writing and strangers and voices and first drafts. What is she talking about? Ah the question of all writers on a good day.

Someone … your boss, editor, passing butterfly … asks you to write something. Or possibly one of the voices in your head has a lightning bolt of an idea.

“Sure,” you think to yourself. “I can write about that.” You’re confident because you’ve written a gazillion minus two of the same type of pieces already.

You do research. Plan the hook (first paragraph). Get a sense for the title. Wash the dishes. Water the plants. Straighten the cushions on the couch. Organize the Tupperware. Get your hair cut. Feed the squirrels and rabbits living in your backyard.

One hour before the deadline you sit down in front of your computer and your brain seizes. This is when you remember that writing is much like driving with the emergency parking brake pulled up.

You entertain thoughts of running away.

Now this, ladies and gentlemen with the inkling to be a writer, is unique to our vocation. You never hear of dentists or administrative assistants or pilots freezing up while at work and fantasizing about running away from home.

Then the voices start.

They tell you that you’re a fake and you should consider changing jobs. Quick! Before the rest of the world finds out.

Maybe you should be a bartender. You never sleep anyway.

That’s when the voices on the other side of your brain start yelling at the voices with the great idea. The one to be a bartender.

“YOU IDIOTS. SHE CAN BARELY CARRY A GLASS OF WATER WITHOUT SPILLING HALF OF IT IN THE SINK. ANNNNDDDD MOST OF THE TIME SHE DOESN’T EVEN LIKE PEOPLE.”

You realize that the voices all know each other. You’re the stranger just like you were on that first day of kindergarten. Yup. You’re the outsider.

“I hate the voices,” you say to the blank screen. “Especially when they talk to each other as though I’m not even here.”

The voices can be SO DAMN RUDE.

And that blank screen with the cursor throbbing like a panicked heart? Also rude.

HOW ARE YOU SUPPOSED TO THINK WITH ALL THESE DISTRACTIONS?

Why are the voices judging me?

Why did I choose to be a stupid writer, anyway?

Oh but the voices know the answers to these questions. Of course they do.

So you. The one with the inkling to be a writer. You can’t fight it. Just go with it.

And I forgot to mention …

There’ll be some pretty good days too. But keep your running shoes nearby. Not to run away, but to go for an actual run. Sometimes the best writing happens when you’re not even at your computer.

Although at your computer is where you feel most at home. And with laptops and technology following you around all the time, obviously running away from home isn’t even an option.

Oh well. You may as well write something then. What else is a writer to do?

(Besides wash the dishes. Water the plants. Straighten the cushions on the couch. Organize the Tupperware. Get a hair cut. Feed the squirrels and rabbits living in the backyard. Fantasize about running away from home.)

Stick with it. It’s not like you have a choice anyway.