Hello, awesome readers! Several years ago, I read a book by Steven Pressfield titled The War of Art. At the time, I believed that he wrote this book especially for me. The book talks about our own resistance, which gives context to procrastination, and I remember feeling grateful for Pressfield’s attempt to reach out and intervene. You […] 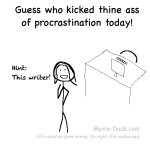 Hello, awesome readers! Well, here we are. Another Monday. A fresh start to a new week. Along with writing articles on parenting and human interest* pieces for other publications, I’ll be working on a post for this blog about procrastination. Defined as the act of putting something off until forever**, it’s safe to say that we […]

Written by Annalise Winter CarsonExclusive for moxie-dude.com Single motherhood is undoubtedly a challenging endeavor, but it can also be a fulfilling experience. Over 100 million women globally are single parents. For these women, it can be more difficult to plan and save for long-term investments, such as their child’s education. Even if costs for education continue to […]

Hello, awesome readers! And if you’re in Canada, HAPPY THANKSGIVING! Money and finances are a BIG thing for single mothers. Said another way, money and finances are a sparse thing for single mothers. BIG, because it’s on our minds. A lot. Sparse, because many of us don’t have any support from our Mr. What-Was-I-Thinking and […]

Hello, awesome readers! As promised, below is an excerpt from my book, SUPERWOMAN: A Funny and Reflective Look at Single Motherhood. It’s the full chapter 2 entitled, A mother’s sixth sense – that damn sense of guilt. Have you noticed that since becoming a parent, you’ve developed an uncanny sense of guilt? Oh, sure. It was there before you had […]