You are here: Home / #KitchenFails / I am Super Chef

Well, well, guess who made something YUMMY yesterday, awesome readers!

I cooked something and believe it or not, my son said, “Wow!”

What?!! You don’t believe me? I would NEVER lie to you, my awesomenesses!

Well, unless if you were holding a gun to my head and asking me where I keep “the jewels”. Then I might lie and say that I keep them at my neighbour’s. (Sorry neighbour.)

But since no one’s holding a gun to my head, here’s how the cooking thing happened . . .

Suddenly I heard a shout from the kitchen:

“There’s nothing to eat around here!”

It was my son.

“Cereal!” I shouted back.

PS. When I’m quasi-writing I often speak in monosyllables. Even when said monosyllables have more than one syllable – such as with the word CE-RE-AL.

But when I looked up and saw my son standing at the door of my office holding an empty box of Lucky Charms, I realized that it was time to take a break and stop staring at the blank screen of my laptop.

I got up from my desk and as I walked towards the kitchen, could feel the determination of a prize-fighting chef lurking within with every footstep.

PPS. Also, my son and I watched The Incredible Hulk over the weekend so possibly some of my attitude may have been a residue from that.

And that, dear readers, is how I got to make something “wow”.

Here’s a pic of . . . well I don’t really have a name for it but it involves chicken. And noodles. Oh and ginger. And some saucy stuff I bought at Club Price.

Notice the halo thingy around the bowl? Even the heavens recognized the greatness of this dish!

“Why can’t you make stuff like this more often?”

His words made me feel proud. Actually more than just “proud”. I felt DELIGHTED. I felt like . . . 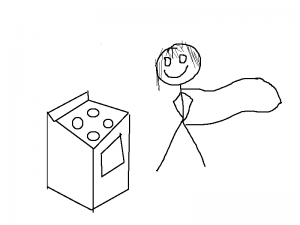 But then he said this:

That’s when I realized that me wearing a cape in the kitchen is just ridiculous.