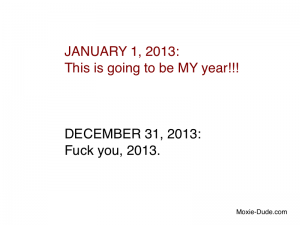 Happy Day to you, my awesomenesses!

This is the best day of the year. Better than Christmas. Better than birthdays. Even better than the day you realized that eyeball cancer isn’t even a real thing.

(Um . . . Yeah. That may have been just me. For the record, I also look upon that day as the day I realized that turning to the Internet to look up symptoms is never a good idea. Especially when there’s wine involved.)

So why is New Year’s Eve such a great day? Because no matter what kind of year you’ve had, you can’t lose.

Math formula for what I just said

You see? It’s all relative. (Einstein would be proud.)

And now I must leave you because my friend Jenn, also known as the Social Media Fairy Godmother, challenged me to finish writing my book by midnight tonight. I don’t think she’ll turn me into a pumpkin or anything if I fail but it’s something I want to accomplish – for myself.

Catch ya later, my awesomenesses!