You are here: Home / Non-travelling Adventures / Introducing the new and improved me. It’s the version that likes watching Olympic hockey. 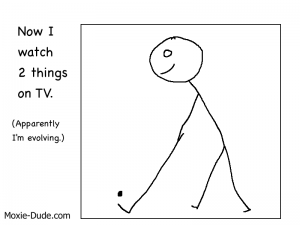 Happy Friday to you, awesome readers!

If you know me in real life you know that there are certain things I don’t watch on TV – ever: the news, sports and anything else that doesn’t have the words ”Criminal Minds” in the title.

Except that yesterday I was involved in a Twitter Party to support an Olympic-centered marketing campaign. (If you have no idea what I just said, here’s a good definition of what a Twitter Party is.)

What does that mean exactly? It means that I had to sit in front of a TV and watch the Canadian vs. US women’s Olympic hockey game – and Tweet about it.

And since the entire world – excluding yours truly – actually enjoys watching hockey, I know what you’re thinking.

But wait! I’m not about to complain. I’m going to tell you that apparently I witnessed some sort of hockey history in-the-making when Canada won after a bunch of things happened that I only quasi-understood at the time.

AND I ENJOYED IT.

Now, all I want to do is watch hockey. And since the men are playing today, guess what I’ll be doing? If you guessed sitting in some sports bar watching the hockey game, you guessed right.