You are here: Home / Boyfriend stories / The 4 phases of an ending relationship. Also, I think I just broke up with a piece of myself. 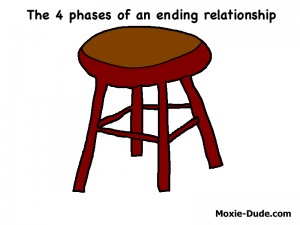 Moving . . . a new job . . . realizing that you’ve just burnt dinner and you have no back-up plan. These are some of the most stressful situations in a person’s life.

And then there’s “the break-up”, which sits on a plateau of its very own. No matter what the reason or who the initiator, the thing about break-ups is that the saddest part doesn’t actually come at the moment of the split, but much later when you realize: “Oh. I guess it really IS over.”

This is because “The End” has four phases. Think of the four legs of a barstool.

PS. Even if you’ve been married or whatever for a gazillion years and have no idea what I’m talking about, you’ll still be able to relate to the barstool analogy because who can’t relate to a barstool?

PPS. That wasn’t actually a question.

Phase 1 – When you realize that you’ve been overlooking yourself 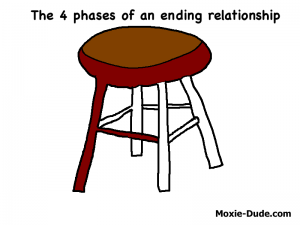 Right or wrong for each other, there’s something sentimental about growing a relationship. And since the majority of you, awesome readers, are women, I think you’ll relate when I say that we have this tendency to want to accommodate every aspect of our lives.

Until that day when we wake up and realize that we don’t even like scrambled eggs . . . or war movies . . . or being lied to about everything.

This is actually a very scary phase because it means that it’s time to re-evaluate what’s supposed to be the most important aspect of our lives: our partner.

The questions that haunt us during this phase go something like this:

Am I being selfish?

What if there’s no one out there for me?

What if I’m just afraid of being alone?

And even though the gods-that-be do not descend and bestow you with the answers, you think that maybe just the fact that you’re ASKING is a sign. Then something happens that pushes you onto the darker side of second-guessing yourself and the next thing you know, you’ve ended your relationship.

Phase 2 – When you wake up the next morning and realize that you’re actually okay. For now. 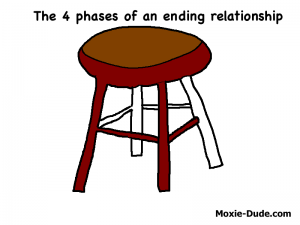 Phase 2 is probably the shortest phase of all. So you went and ended the relationship and not only did you survive the first night as a single person, but you actually feel kind of good about it. You lay in bed longer than usual because the ceiling seems to be inspiring you into making plans for your new life.

Your first plan of action is to get rid of all the evidence. Clothes in the closet. Man things in the bathroom. Left-behind beer in the fridge . . . All must go. And suddenly you realize just how much of your universe – space and time – was being sucked up by discontent and disappointment.

Phase 3 – When you set up camp beside the hamster. 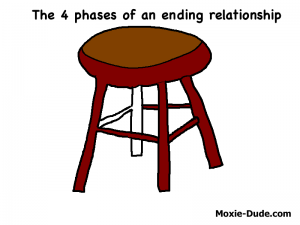 This is where you go inward. Suddenly you realize that driving alone in your car has turned into a sweat lodge for your emotions. The lyrics to every single song on the radio hijacks your memories – all the shared dreams and conversations – and it dawns on you that oh-my-goodness maybe you made a mistake!

What if it WAS me?

What if I WAS being selfish?

What if he really WAS the one?

What if I WASN’T settling???

And so you call your mom and you call your friend and tell them what the hamster is now trying to make you believe – that you HAVE to call him back – and they confirm what even the now-ex has been saying to you in the gazillion emails he’s been sending you since the break-up:

That he’s not a bad person, he just made some mistakes.

And then you think, “one mistake . . . two mistakes . . . but after TEN YEARS of mistakes the word “mistakes” begins to define the entire relationship.

Phase 3 is the saddest, the longest and the most volatile of all the phases. The key is to not let yourself think about the good things – but to constantly remind yourself of the parts that should have been classified as “unacceptable”.

Phase 4 – You wake up, take a deep breath and realize that your barstool is now complete with four legs – and strong enough for you to sit on by yourself. 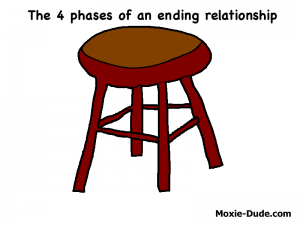 This is the day that you notice the sun has melted a thin layer of the sadness that grew around both your perception and awareness. It’s also the day that you choose to keep many of the pieces from that relationship in your heart because “he’s not a bad person”. There were times when you really did believe that love meant forever, no matter what.

Except that now it’s time to let go and move on. Even if moving on means leaving a piece of yourself behind.

If you enjoyed this post you may enjoy my series on single mothers.