You are here: Home / Hamster Ramblings / 3 Things I learned as God in Dunedin’s Mardi Gras Parade 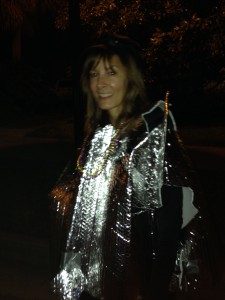 One of the highlights of our spring break trip to Florida was when the teens and I got to feel what it must be like to be God for almost an entire hour. Now before you accuse me of violating my status as a mere mortal, hear me out.

If you’ve never been to Dunedin, think of a small city made quaint by charming little shops and restaurants that are mostly owned and run by real people (no commercial franchises in the “village”). What I love most about this diverse and colourful town is the spirit of its residents. Everyone is openly friendly, whole-heartedly enthusiastic and not just interesting, but interested.

And because my stepmom is true to her Irish roots – from her red hair to her keenness to try anything once (twice if she likes it) – we were invited by a friend of hers (a Dunedin resident and nightclub owner) to be part of the Mardi Gras parade.

Confession: At first I questioned what my stepmom had gotten us into. This is because dressing up as a blinging silver Village People is slightly out of my quasi-middle-of-the-road comfort zone.

Our job in the parade? To throw beads into the bead-hungry crowds as we paraded down the streets of anything-goes Dunedin. This may sound as easy as dishing out soup (made by someone else) to homeless people but really, it became more complicated than that. It became PERSONAL. This is because I felt a little like God.

For one thing, I noticed that the people I was most drawn to sharing the much-desired-I’m-not-sure-why beads with were the quiet, shy types, the sincerely enthusiastic types and little children.

And as I walked in parade-procession excitement, I couldn’t help but wonder if this wasn’t how God felt when she was handing out stuff like pretty feet and privileged surroundings during our births.

I felt this need to connect and make eye contact with everyone I chose to share the beads with. Instead of just randomly throwing the stringed beads out into the crowds, I would single out the shy, the enthused and little kids; pleased with my choice when they looked back at me and mouthed an honest “thank-you”. Displeased when they greedily scooped up the beads and disregarded my goodwill.

The third thing I noticed was how I felt when I ran out of beads: useless, unserviceable and possibly even unworthy.

But then I looked down at my flip-flops and remembered that I’m not God at all. I’m just a mere mortal throwing plastic beads – and not pretty feet or privileged surroundings – to a bunch of drunken people.

This made me feel both humbled and thirsty.