Happy Day to you, awesome readers!

So the teens and I are back from our spring break trip to Florida and for some reason I can’t seem to come up with a smoother way of using all those words in the same sentence: Spring. Break. Trip. Florida.

Normally this wouldn’t be an issue because I would just separate them into two sentences but it seems I’ve forgotten how to do that as well. This is because yesterday was a travel day that started at 3 a.m. and I didn’t get to do ANY writing. Not even a grocery list. So possibly the hamster still thinks we’re on vacation.

Oh and while I’m thinking about it, I want to send out a thank-you to all the burglars that didn’t visit my house while we were away. And since NO burglars visited our house I guess this is just a general thank-you to ALL burglars. You guys rock!

Highlights of our trip. To Florida. During spring break. (You see? Even THAT’S unsmooth.)

Conversation with an elderly neighbour/friend that I get to see whenever we go to Florida.

Neighbour/friend’s wife: No, no. This is Mona. NOT her 14 year-old daughter.

This made me feel both old AND young. And possibly a little over weight.

The afternoon I nearly got eaten by a shark. (This is the first time I almost died on this trip).

In their defense they weren’t sharks at all. They were dolphins. But for 3 seconds they WERE sharks. You can’t possibly know how long 3 seconds is until you’re kayaking in the ocean and experience a sense of about to be something’s lunch.

The night I almost went to Dunedin’s Mardi Gras Pageant to watch the crowning of the queen. 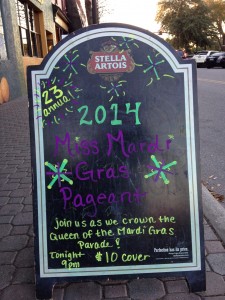 And when I say “queen” I don’t mean THAT queen. I mean the other kind. I was a little disappointed because my stepmom and I were psyched for the show. I mean, where else can you stare at a bunch of men dressed as women without being rude? Only when we got there (“there” being Kelly’s Chic A Boom Room) we found out that the pageant started at 9 p.m. (and not 6:30). This is when we realized that we were about to venture into territories past our bedtime. Or possibly that all those hours of drinking with men who are prettier than you could have irreversible side-effects on a person’s self-esteem.

The second time I almost died on this trip.

I was minding my own business when all of a sudden I received this notification on my phone: 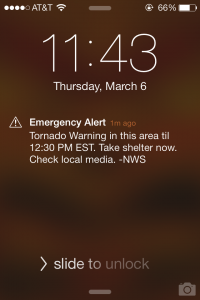 Apparently we weren’t really in danger (according to my dad) but when my phone randomly tells me to “take shelter” I tend to believe my phone. Just saying.

The most awkward moment EVER.

So I’m having drinks with my dad and stepmom because I’m old enough to do that now and suddenly this older gentleman (only “gentleman” isn’t really the word I’m thinking of) decides to believe that I’m sitting by myself and sits next to me so that he can blatantly hit on me.

Was I flattered? No. I was uncomfortable (pronounced: AWKWARD-TO-THE-POINT-OF-WISHING-THE-SHARK-DOLPHINS-HAD-EATEN-ME-WHEN-THEY-HAD-THE-CHANCE).

In other news, it’s time for the weekly wrap-up!

Dear Technology: Mothers everywhere are thanking you for the recent lice plague.