You are here: Home / Aging and its niceties / Wherein I share a hermetic secret. PS. The voices in your head may hate me for this. 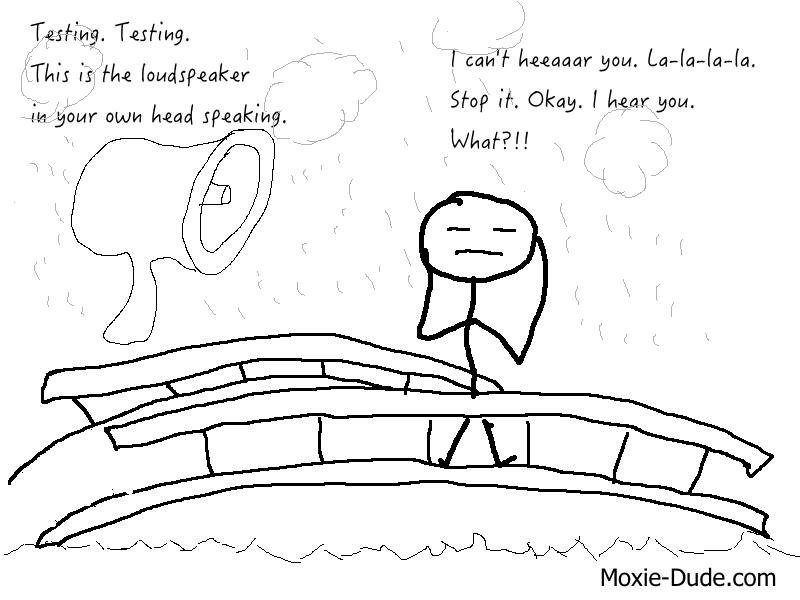 While it’s true that getting older (also known as aging) comes with a few annoying side effects, there’s something to be said about coming to terms with the voices in your own head. And when I say “coming to terms”, I mean that you stop feeling the need to apologize for everything.

If you’re younger than me, you may not get this because you probably still believe that the voices actually know what they’re talking about. (Hermetic secret: most of the time those voices are talking out of their own ass.)

If you’re older than me, you may be asking yourself why I’m sharing this one-and-possibly-only perk to our age. Answer: I have no answer. Except that maybe I’m wishing someone had explained to younger me that listening to the voices argue with each other is not at all like therapy.

No matter what your age, this phenomenon only occurs after a certain amount of time spent here on planet earth. It’s a “right-of-passage” that feels a lot like crossing a very long bridge on a rainy day.

Once upon a long time ago I was 5 years old.

Note to my kids: Stop shaking your heads in disbelief. I can feel the velocity of air movement from here.

So yeah. I was 5 years old once. When we were little, my brother and I used to love playing with a wagon my father had made us. This is a very long time ago so the exactness of this memory may be a little diluted from a 40-year layer of dust but from what I think I remember, the wagon was made from an old and sturdy kitchen cupboard door on wheels. (Tiny Tykes has yet to be invented during this time-warped story.)

The part that I do remember well is how I FELT. I could never let my brother pull me for longer than a few seconds because somehow I just “knew” that the neighbours were watching us from their windows and muttering in disgust:

“Look at her! She’s making her poor little brother pull HER!!!”

At the time, there were only 2 ½ years between my brother and I. And while I realize that there should always be “2 ½ years between us”, that kinda changed when he – my brother – passed away. You can read about that here. It’s not a happy post so feel free to skip it.

Back to the memory lane part of this story . . .

When you’re 5 and 2 ½ years old, the age gap is of Grand Canyon proportions. And thanks to the neighbours (also known as the voices in my head) it was impossible for me to enjoy my turn to be pulled on the wagon.

Veering off memory lane, back to the busy boulevard of today

Despite what I believed back then, the neighbours were not actually watching or judging. I know this now. But those same voices of “everyone else knowing better than me” have been annoyingly criticizing me ever since I can remember. Which explains an incessant need to apologize.

During birth: “That’s not how you go through the birth canal! OMG. Our first breath and we’re cringing in embarrassment for her.”

And then I grew up and the voices grew up with me:

As a young mother: “Hmmm making her kids wear a dress AND running shoes. Tsk. Tsk.

At the gym: “What is she doing? That’s not how you do a proper leg extension!”

While doing yard work: “Oh my god!!! Somebody please put that girl out of her misery and show her how to cut the damn grass!”

At the grocery store: “Look at all the frozen dinners she’s buying. What an ignorant ignoramus!!! She must live in a trailer.”

Crossing the bridge to this side of my age

Now that I’m older, I can feign a certain wiseness. Clearly not an all-encompassing kinda wise since “wiseness” isn’t even a real word but I CAN claim a certain intimacy with the voices that have been haunting me since forever.

First of all, the world is busy. Random people are not lurking behind curtains to silently judge me (or you, if you haven’t crossed that right-of-passage bridge yet). All those that do not live in your head are diligently trying to deal with THEIR OWN crap and insecurities because they have THEIR OWN voices to contend with.

As it turns out, the voices are not a racist bunch; you don’t have to suffer from schizophrenia to hear them. Each and every one of us has voices that dwell in our beautiful minds.

Also, the voices are stupid. Not only are they NOT reflective of what the rest of the world is thinking, but they’re an imaginary figment that at some point inherited way too much power over our own feelings of inadequacy.

Oh and here’s some pudding for that proof

It dawned on me recently that whatever I’m doing – whether it be training, cutting the grass or buying food – I’ve been doing it a hell of a lot longer than the majority of the people the voices are trying to impersonate. (Now there’s a happy thought.)

Dear the voices in my head:

I will no longer apologize for myself. Or to myself. I realize that this totally changes the dynamic of our relationship and understand if you feel the need to move out. You’re also welcome to stay. Just know that entertaining my own feelings of inadequacy will no longer be considered as our favourite past time. So make yourself useful and remind me to pick up a box of Triscuits for our Friday night Criminal Minds.