You are here: Home / Hamster Ramblings / 6 items or less. It’s not a freaking math problem, people! 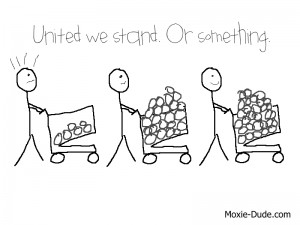 We’ve all been there.

It’s been a long day and you’ve just stopped in to the grocery store for a few items because . . . well, you have to. And when I say “a few items” I mean that you have SIX items in your grocery cart. Yayyy you qualify for the “six items or less” line. Except that as you’re standing there – in the “six items or less” line – you notice that the eight people in front of you have more than six items. And by more than six items I mean 27 items.

All good. You take a deep breath and know that if you say something it will most likely come out sounding like:

HEY, FUCKTARDS! CAN YOU NOT COUNT? IT SAYS SIX FUCKING ITEMS. YOU’RE IN THE WRONG LINE, ASSHOLES.

So instead you decide to just swallow your thoughts in big gulps and accept that all is not fair in the world. You start thinking about the words “United We Stand” – although you’re pretty sure that these words were not meant for frustrated people standing in grocery lines after a long day. Or possibly that’s exactly who they were meant for because suddenly you realize that wearing a placating expression both on your face and your sleeve has just become a little easier. Not monumentally but a little.

“United we stand,” you repeat in your head.

And as you’re standing there with your six items in the line that doesn’t seem to be moving, a cashier walks over to the neighbouring cash, removes the “closed” sign, and says, “Next person, please!”

Except that you don’t hear her because you’re too busy staring at the eight assholes in front of you while thinking that you may just end up being united with them for the rest of your life. You think about what you WOULD say to them if you weren’t so tired.

Suddenly you feel a gentle nudge that can only come from Mother Theresa. Mother Theresa is telling you that the next cash has just opened up and you’re the person with the least items which means that you should go first in the new line – and rightly so.

PS. He’s not REALLY Mother Theresa. He’s actually just the guy behind you but it’s been one of those days and right now he’s Mother freaking Theresa.

You thank Mother Theresa for his kind fairness and all the while that you’re pushing your cart of six items to the newly opened line, you can’t help but think about how you’ve possibly been too hard on the human race because maybe there really are some nice, honest AND FAIR people in existence. Perhaps.

You pay for your six items and as you pick up your ONE bag you look over towards the “six items or less” line and notice that the same people are still waiting there because for some reason the cash register is broken. A small, devious smile creeps out from your brain and slides into place on your face and you realize that you are not – and will never be – Mother Theresa.

And you’re okay with that.