You are here: Home / Hamster Ramblings / Girl’s night out. Better than therapy. 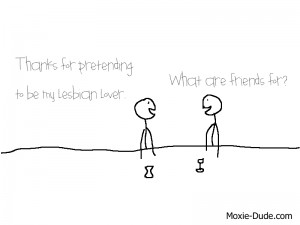 I have a question for you:

When was the last time you had a “girl’s night out”?

PS. I don’t want to sound racist or anything but if you’re not a girl, this question may not be for you.

Because last weekend I had a “girl’s night out” with my friend and I realized – or possibly just remembered – that going out with a girlfriend is exactly like therapy only better. (Unless if your therapist drinks blue cocktails in large numbers; in which case I may have to reconsider that statement.)

Some of the highlights of our evening:

We got to name said blue drink. (“I feel like I’m drinking a Smurf. Is my mouth blue?”)

I got to tell a drunken man that we were lesbians. There’s nothing like watching a man try to recover himself as he works really hard at hiding the fact that you’ve just stumped him. (Because clearly a man who stands speechless and with a dumbfounded expression on his face is never an indication that he’s at that moment speechless and dumbfounded.)

We got to ponder very important questions such as why there’s an “s” in the word “lisp”. Our thesis-like, 37-minute discussion concluded in a discovery that some things just don’t – and will NEVER – make sense and that’s okay. (Unless of course if you speak with a lisp; then it’s just mean.)

One of us – although I don’t quite remember who – got to vent about things like why we think that our boyfriend should confirm plans with us every single day leading up to said plans. AND (the best part) we got to tell the story from OUR POINT OF VIEW ONLY. This was both liberating and reason to order another round of drinks. (At least that’s how I remember it.)

The other one of us mentioned a guy that she was interested in and the other one of us – being the wine-induced proactive type that she is at times – had the brainiac idea to text him. From that moment on said interested party’s cell phone became the centerpiece of the bar as we waited for his response. Which never came but we considered that a good thing because it meant that he had a life. Which also lead to the question: Oh no! What if he has a girlfriend?!!

Update: He does not have a girlfriend and the one of us that was interested in him actually heard from him the next day (right after deciding that she “hates smurfs”).

Back to our original question:

When was the last time you had a “girl’s night out”? What did you do and what were some of the highlights?

PS. While I make fun of our evening and of ourselves, I do want to say that I was the designated driver and drank responsibly. And by responsibly I mean that I had water in my wine glass. Wine too but mostly water.