You are here: Home / Kids / When your teenager is mad at you

So I’m thinking that thanks to my clever use of titles, you’ve already guessed that my teenager is mad at me.

And although I’m the adult here and she’s the non-adult, I have to say that I agree with her.

Let the record show: I only agree with her THIS time.

Truth is, I would be mad at me too if I was wearing her shoes. Or in this case her newly stained favourite pair of lululemons.

It all started on Monday morning when I decided to make my own breakfast and bring it in to work to eat at my desk. The idea: Save money AND eat a healthy breakfast. In theory, a great plan.

So what was my breakfast?

Except that I never made it to the YUMMM part because the Tupperware container opened while I was driving (the sneak!) and I ended up with a mess all over the passenger’s seat of my car.

Dear My Mom: THIS is why I don’t keep all of those empty yogurt containers that you keep bringing me: they’re CRAP.

Clearly Monday felt that it wasn’t being Monday-ish enough. Mondays can be assholes that way.

All good though because I was late and rushing and had other things on my mind. Like, “now what am I going to eat?!!”

Then today I forgot all about the mess on my front seat, which lead me to forgetting to vacuum my car. And one thing led to another and I forgot that I was picking up my daughter. Well, to be honest I remembered that I was picking up my daughter. I just forgot that the seat she would be sitting in was a yogurt-granola-by-now-thawed-out-berries mess.

Again, all good. I had a plan.

“You should probably sit in the trunk,” I said as she jumped in my car before noticing the mess.

That’s when she got all like, “Why does my ass feel like I just sat in someone else’s abandoned diaper?”

“Watch your language, young lady. That’s BUM to you,” I said. Because there’s nothing like a parent telling a pissed-off teenager how to talk to put things back into perspective.

And so here’s my passenger’s seat. Which I meant to vacuum as soon as I got home today but … well here I am writing about it instead. 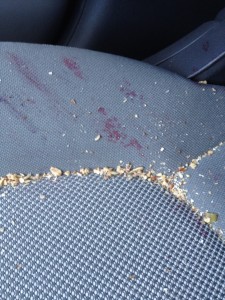 PS. The mess doesn’t look as bad now because most of it is being worn by my daughter’s butt.

PPS. Despite how it looks, Mr. Quaker Harvest Crunch was NOT murdered in my car. As far as I know.