You are here: Home / Hamster Ramblings / I may argue with my own mind – which sounds crazy – but at least I’m sane enough to know when I’m wrong. 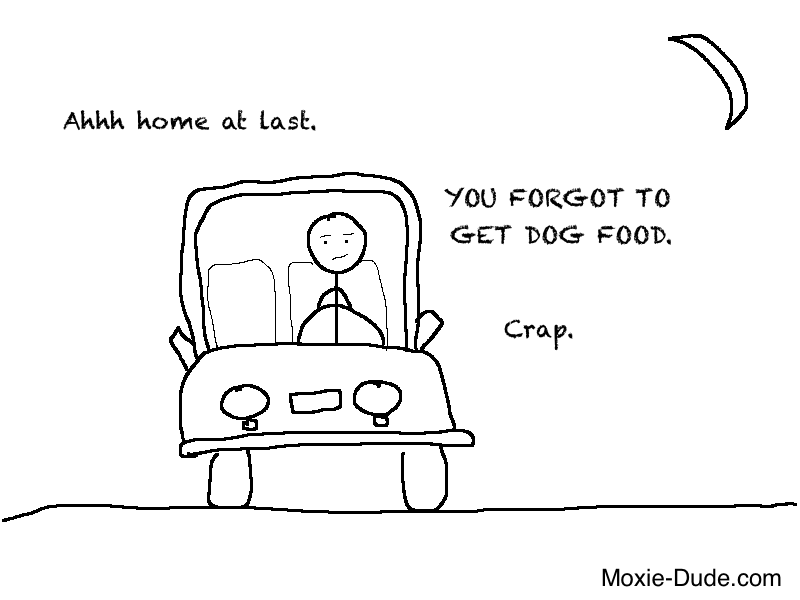 Finally you pull into your driveway and it hits you: You forgot to pick up dog food. Crap.

And then the argument starts.

“YOU HAVE TO TURN AROUND AND GO TO THE STORE.”

“The dogs are fine. Besides, I’ve read that skipping a meal once in a while is a good thing.”

“YOU NEED TO FEED YOUR DOGS.”

“I’ll give them some of my supper. They love toast and peanut butter.”

“THAT VERY THOUGHT PROVES THAT YOU’RE A TERRIBLE DOG OWNER.”

You know you’re right but at the same time you don’t want to be right. You’re tired. It’s been a long day. You’re paralyzed. You sit, staring at your driveway. You’re torn into thirds. Part of you KNOWS you should just go to the damn store. Another part of you wants to walk into your house and slam the door on today’s face. And then there’s another part of you that sits and waits – as though some magical dog food delivery fairy is going to suddenly appear, making the day end happily ever after.

Time is silent. The dog food delivery fairy is not coming to your rescue.

And then you remember … THERE IS NO WINE WAITING FOR YOU IN THE FRIDGE. You drank it last weekend when your friend, Sylvie, came over. Double crap.

“I know! I’ll go to the store. I need to get dog food anyway,” you say as you put your car in reverse.

“AWWW LOOK AT YOU, DOING THE RIGHT THING. THOSE DOGS ARE SO LUCKY TO HAVE YOU AS A HUMAN.”

This time, you choose to ignore yourself.