You are here: Home / Non-travelling Adventures / I am the polite Canadian no more. Or something. 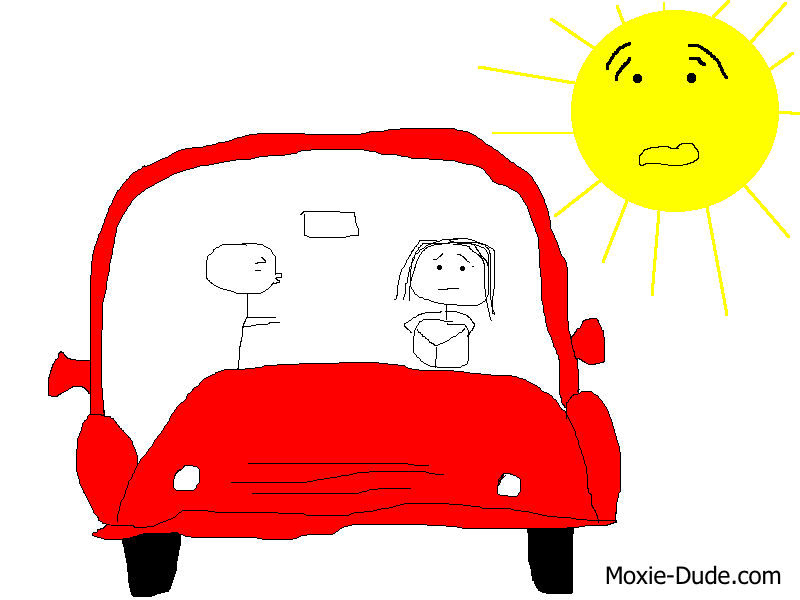 Do you like your neighbourhood? I have to say that I feel lucky in that department. I LOVE my neighbourhood. Recently though, that almost changed for me. But before I tell you what happened to make me question my “hood”, let me tell you about where I live …

Mostly made up of families with young children and working class homeowners, we’re a courteous group that’s always ready to lend a garden tool or helping hand. Toys left on the front lawn never disappear and friendly conversations between fences are just as easy-going as fleeting clouds. As well, waves and smiles are passed around like Frisbees on a beach – with enthusiasm and bouncy charm.

So of course when the quiet, old man whom I’ve waved to at least a hundred times approached my car and asked if I could please drop him off at the corner store, I said yes. Throughout my eleven years of living on this street, this was the first time I had heard the old man speak. He walks a lot. He stares a lot. Sometimes he’ll even wave back, but I had never heard him speak.

And I was so busy processing my good deed for the day that I didn’t even notice how quickly he walked around and slid into the passenger’s seat after I gave my consent. If I had been paying attention, I may have considered giving him my grandson’s superhero cape because – thinking back on it – he moved into that seat like a ninja. Except that he’s not a ninja and definitely not deserving of a cape as I was about to find out. Unless if superheroes are gross. Then he was totally superhero-ish.

“Thank you, my dear. These old legs get tired,” he said to me in a heavy, unfamiliar accent.

“My pleasure,” I said beaming. I don’t know about you but good deeds always make me beam. (Possibly because on a subconscious level I still believe in an all-watching God and the power of karma.)

The chitchat about my passenger’s tired legs was repeated just enough times to satisfy our drive to the corner store. And with the topic of his tired legs still fresh on my mind, I drove as close to the door as possible. Possibly even illegally close. (I’m thoughtful that way. Also a bit of a rebel.)

As I courteously put my car into Park so that said passenger with the tired, old legs could step out with ease, the space in my car was suddenly consumed by an awkward silence. There I sat, quietly waiting for the old man to disembark. There he sat, staring at me. So yes. Awkward.

“Well … have a good day,” I said in an attempt to encourage his send-off.

But instead of getting out of my car, he took my hand and squeezed it. At the precise moment that he leaned towards me, I was thinking, “Awwww he’s feeling grandfatherly,” and made a granddaughterly effort to meet him half way for a cheek-to-cheek farewell. To my shock (and any other word you can think of that means “your-entire-body-just-puked”), he put his hand behind my head and pushed my face straight into his mouth. Wrinkled, loose and sloppy, I was more than shocked. I was disgusted.

I won’t lie to you, dear readers. My first reaction was to politely camouflage my embarrassed disbelief. Feeling like a dunce, open-mouth breather, I simply smiled, wished him a nice day and drove away in stunned disbelief. Meanwhile my brain drew in its chubby cheeks the way a baby does when sucking on lemons. YUCK!!!

In that moment and for a few days after, all I could think about was selling my house and moving. My street and neighbourhood had been tainted forever.

And that’s not the end of the story.

Exactly four days later I was helping my grandson into my car when guess-who sauntered up to us and asked for a lift to the store because “tired, old legs” yadda, yadda, yadda.

With my keen sense of observation, I quickly noticed that he was actually walking in the direction FROM the store. And in his hand was a transparent, plastic bag comprised of a newspaper and a box of Smarties. He had already been to the store!

“You want to go BACK to the store?” I asked.

And because I’m too polite for my own damn good, I said yes. Although I’m pretty sure I wasn’t beaming this time.

“Maybe I misunderstood the whole ‘other’ incident,” I told myself. “Maybe I imagined it.”

Except this time, instead of babbling on about his tired legs, he just rubbed my back as though he expected a genie to come out of it. EWWW!!! (My entire body is cringing as I write this.)

“Put your hands on your lap where I can see them BEFORE I BREAK YOUR FINGERS,” my thoughts yelled. I didn’t actually say that out loud. Only my thoughts said it. And only to me. (Sometimes it sucks to be Canadian.)

Truth is I didn’t say anything. I just drove as fast as I could without getting a speeding ticket and dropped him off at the store.

I’ve been talking to myself ever since; rehearsing out loud the conversation I plan to have with him the next time his tired, old legs want a lift to the store.

Then this morning it struck me. I don’t have to explain anything to him. I don’t even have to feel guilty or apologetic or uncomfortable or that I’m being difficult.

I believe that life puts lessons on our path. And her lesson to me here was to speak up and assert myself.