You are here: Home / #KitchenFails / I am the anti-chef. And I blame Siri. 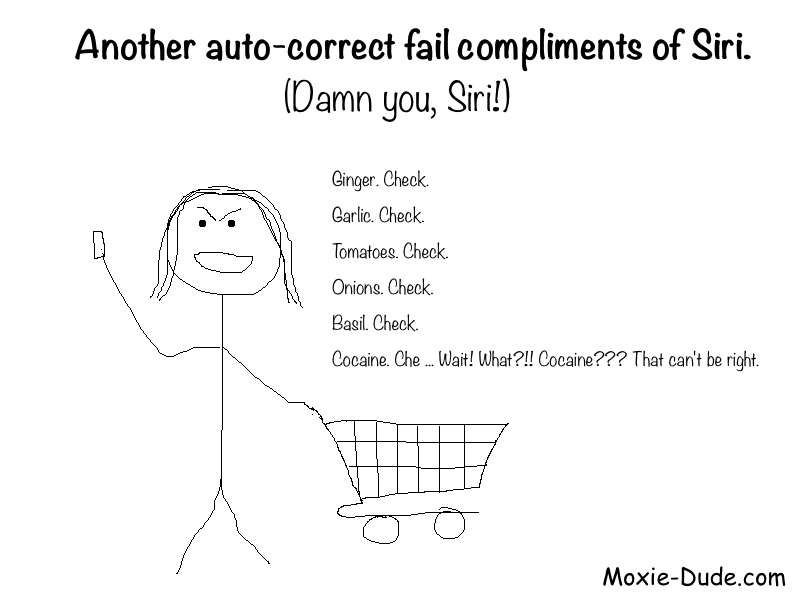 I don’t usually like to start posts sounding paranoid but I have to tell you … I’m pretty sure that Siri hates me. There. I said it.

It all started when I was driving home from work earlier this week and suddenly realized that I would be spending the evening alone. No kids and no boyfriend can only mean one thing: that I get to eat whatever I want. Frozen pizza … cereal … Triscuits …The beauty of eating alone is that the kitchen becomes my oyster. And by “oyster”, I mostly mean the kind that comes from a can. You know. To eat with my Triscuits. (I’m imagining that you can imagine my delight.)

As I was running through my limited choices of self-proclaimed gourmet-ness, I suddenly remembered a dinner my friend Marcia made for me a few years ago. It was some sort of “sautéd” vegetable and pasta dish and it was delicious. As far as my memory was concerned, she didn’t even follow a recipe. She simply poked her head in the fridge and with the elegance and buoyancy of a real-life chef, tossed whatever vegetables she found into a perfectly preheated skillet. She even earned the right to say “voila!”

“How hard can it be to throw a bunch of summer vegetables into a frying pan?” I asked myself out loud.

Maybe it was the confidence with which the question was asked and maybe it was pure ignorance on my part but the rest of my drive was done in smug anticipation. You know that feeling you get when you’re hungry and you can’t wait to eat because you just “know” that you’re going to be eating something delicious? Well I had that feeling.

And then I remembered that mostly what I had in my fridge was vegetables in the form of condiments – also known as ketchup and relish. All good. I still felt on top of my game because all I needed to remedy the situation was a short list and a quick stop at the grocery store.

Naturally, since I was driving, I turned to Siri for the task of creating said list. (If this is your first time here, my memory is broken and I rely on lists for just about everything.)

“Siri, new note,” I said into my iPhone. At this point I wasn’t just feeling smug. I was also feeling like a quasi-executive. Or at least what I imagine quasi-executives feel like; ones that have super-human multi-tasking abilities and can drive AND dictate multi-million dollar notes to themselves. (Yes, I’m aware that my petty grocery list isn’t a multi-million dollar note.)

“Okay. I can take that note for you,” Siri responded in her most loyal and devoted voice. “What would you like the note to say?” And I was off to the races, reciting my list of ingredients for a delicious summertime vegetables and pasta dish, while I continued my commute in the direction of the nearest grocery store.

Once at the store, I was able to zip through my list … again, just like an executive. An EFFICIENT and PRODUCTIVE executive.

One minute I’m throwing items into a grocery cart like a ninja, the next I’m walking aimlessly up and down each and every aisle trying to figure out what rhymes with “cocaine”. (The words “Siri, you dumbass!” may or may not have crossed my mind at this point.)

I was in the pet food aisle when I finally had a breakthrough.

“Oohhhh. I must have said CANINE. Cocaine … canine … sort of rhymes.” Obviously a code word to myself meaning DOG FOOD. (I’ve heard that executives create code words for themselves ALL THE TIME.)

A few minutes later I was standing in line at the cash, feeling quite pleased with both my ability to decipher my own code word AND my level of competency. Any frustration I may have felt just a few short minutes before, already forgotten. And Siri, already forgiven.

Upon my arrival at home, I quickly went to work in the kitchen – my oyster – and created this:

Which then turned into this:

I barely made it through swallowing my first bite when I realized that THIS – my efficiently improvised creation – tasted NOTHING like my friend Marcia’s creation. While Marcia’s dinner sparked memories of “deliciousness”, my dinner triggered a word-association derby with sophisticated expressions such as “yuck” and “bland” swimming in my head.

Chewing gave way to a thoughtful standstill in time as I tried to figure out what I could possibly have done wrong.

That’s when it hit me.

Clearly, Siri WANTED me to fail.