You are here: Home / Pretending to be a grown-up / The Man Bun: A female perspective 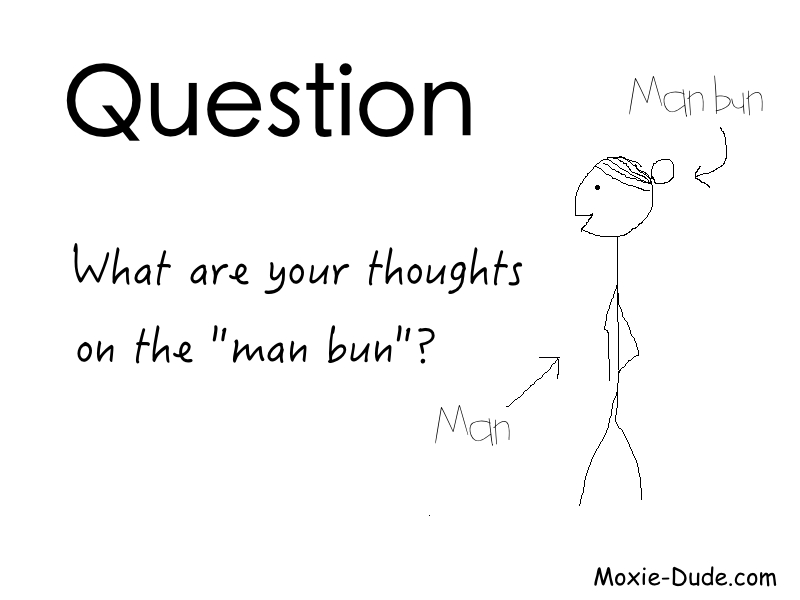 So according to what’s trending in men’s fashion, the “man bun” is in. Hollywood is talking about it. Celebrities are flaunting it. And fashionistas are advising men that it’s the best way to get laid.

But is it really?

From a non-celebrity point of view, I have to say that the man bun makes me cringe. It even makes my libido cringe. And while I may not be the hippest hipster in town, I still value my opinion and thought I’d check out what other women are saying about the man bun.

Naturally, I did what anyone else would do when researching for an important topic: I reached out to my social media networks.

Following are a few of my favourite responses to the question, “What are your thoughts on the man bun?”

Disclaimer: No man buns were harmed during the writing of this post. Almost.

I’m not a fan, but you do you, young sir. One of my sons pulled his longish hair back for work and it looked okay on him. I would hate it on my husband. – Anne Parris, Midlife Boulevard

I like it on certain people. And I like it at a certain length. If they’re doing a man bun and it’s about as long as my hair, it’s not gonna work for me. But on some guys it’s kind of hot. – Andrea Bates, Good Girl Gone Redneck

Depends on the guy. If he looks kind of rugged and has some scruff and looks kind of outdoorsy, I wouldn’t mind. I’d probably think it was hot! It can’t be too big of a bun and definitely not planned, just kind of haphazard, like his hair was in the way. – MaryBeth Sanok Karapcik, Maple Brown Sugar

Looks good on some guys, but usually not anyone over the age of 30. – Mindy Klapper Trotta, Relocation: The Blog

If you’re going for the Samurai warrior look, then the man bun is great. Otherwise, not so much. – Lisa Kaminski Beach, Tweenior Moments

All I can think of when I see them is how it’s going to affect hair loss when they get older. – Tamara Grand, FitKnitChick

No. Just no. All kinds of wrong. – Ali Davies, Design Your Life at Midlife and Beyond

My grandfather had long hair, and on family afternoons he’d be surrounded by his granddaughters, braiding his hair, putting little plastic butterfly and chick clips in it, and probably a man bun, too. I think it’s very cool that men are feeling freer to wear their hair any damn way they choose, including man buns. Their bodies, their choice. – Beverly Diehl, Writing In Flow

I’m a fan, but only on some men. They need to have that special type of swagger to actually pull it off. When my husband and I were in L.A., I kept calling out the man bun sightings by saying “Man Bun Alert.” I should have taken pictures. Hindsight is 20/20. On younger men, man buns work. On older men, ehhhh, not so much. But hey, either way, my 52 year old azz can still look! – Valerie Streeter Albarda, Midlife-A-Go-Go

I am a man bun mom. I think my 20 year old looks adorable. We share hair accessories. He is an art student and it fits him. His whole life, he’s had short hair for school and sports. It’s only hair and it’s his one chance to do his thing. A little expressiveness that isn’t permanent like a tattoo. His girlfriend likes it too. – Lian Dolan, Satellite Sisters

It is a thing on the high school soccer field this season. It feels like a very fresh and international look. It’s funny though. The boys and young men are wearing it long and ready for the man bun or high and tight, very old school Sinatra. The bushy beard seems to be dying the death it deserved, but sexy trim scruff is so in. Just what’s happening in my neck of the woods, eastern mid-atlantic. – Erin Dwyer Dymowski, Sisterhood of the Sensible Moms

I work very hard on not judging other people’s fashion choices. I mean, especially now that I’m older and have to constantly fight the “What are kids thinking with their baggy jeans and booty shorts” thoughts. People express themselves the way they express themselves and whatever makes them feel good or comfortable is awesome. That being said, I think the man buns are dumb. – Michelle Poston Combs, Rubber Shoes in Hell

I only like man buns below the waist. I think above the waist they are a waste. – Molly Stevens, Shallow Reflections

I think androgyny is very sexy, and I’ve seen men adopt female traits while still exhibiting plenty of masculine traits. It shows confidence and vulnerability at the same time. Such a fascinating, seductive paradox. We’ve seen this before with muscular men in pink shirts, burly men holding babies in a tender way, athletic men doing lyric dance moves (Gene Kelly, sigh), and in the acting of androgynous men like Johnny Depp. The man-bun is just another way to create that beguiling blend of strong-pretty / masculine-vulnerable. When the perfect ratio is expressed, it makes my heart melt. (And for the record, I really admire women who can be soft and totally fierce at the same time.) – Karen D. Austin, The Generation Above Me

As with almost all styles and fashions, depends…. Who, what, when, where, how… – Anita Dzirne-Irlen, Look For The Woman

I love them! I think they’re gorgeous/sexy/adorable. Never met one I didn’t like. – Tilley Creary, Preshus Me

I am cool with it. I love men. – Kyla Cornish, Mommy’s Weird

I really think it depends on the type of man. Like if it’s a sort of burly guy who looks like he had to throw his hair up to get it out of the way during some labour-intensive pursuit … sure. Think: lumberjack. But if it makes it look like he’s on his way to ballet class … not so much. Although I imagine that there’s a portion of the population who would totally dig the ballerino … Kind of depends on the man, I think. Like, if my husband went that route, I’d laugh. A lot … – Jessica Thomson, Just a Mum?

A number of young men at work do this, and there’s no problem for them. I think it’s about time men start claiming their hairstyles. – Lesley Donaldson-Reid, Real Women Drive Stick

So there we have it. The good, the bad, and the what-are-you-thinking on man buns.

But we can’t end this discussion just yet! This Huff Post article by Kate Bratskeir does a great job at depicting world-leaders from today and yesterday sporting the man bun.

And here’s an episode of the Steve Harvey Show with guest Brock O’Hurn who apparently gained internet fame with his man bun!

What about you, awesome readers? What are your thoughts on the man bun?