You are here: Home / Hamster Ramblings / 3 Classic movies you may never have to see after reading this. Or want to. Also, spiders and their webs are creepy. And beautiful. 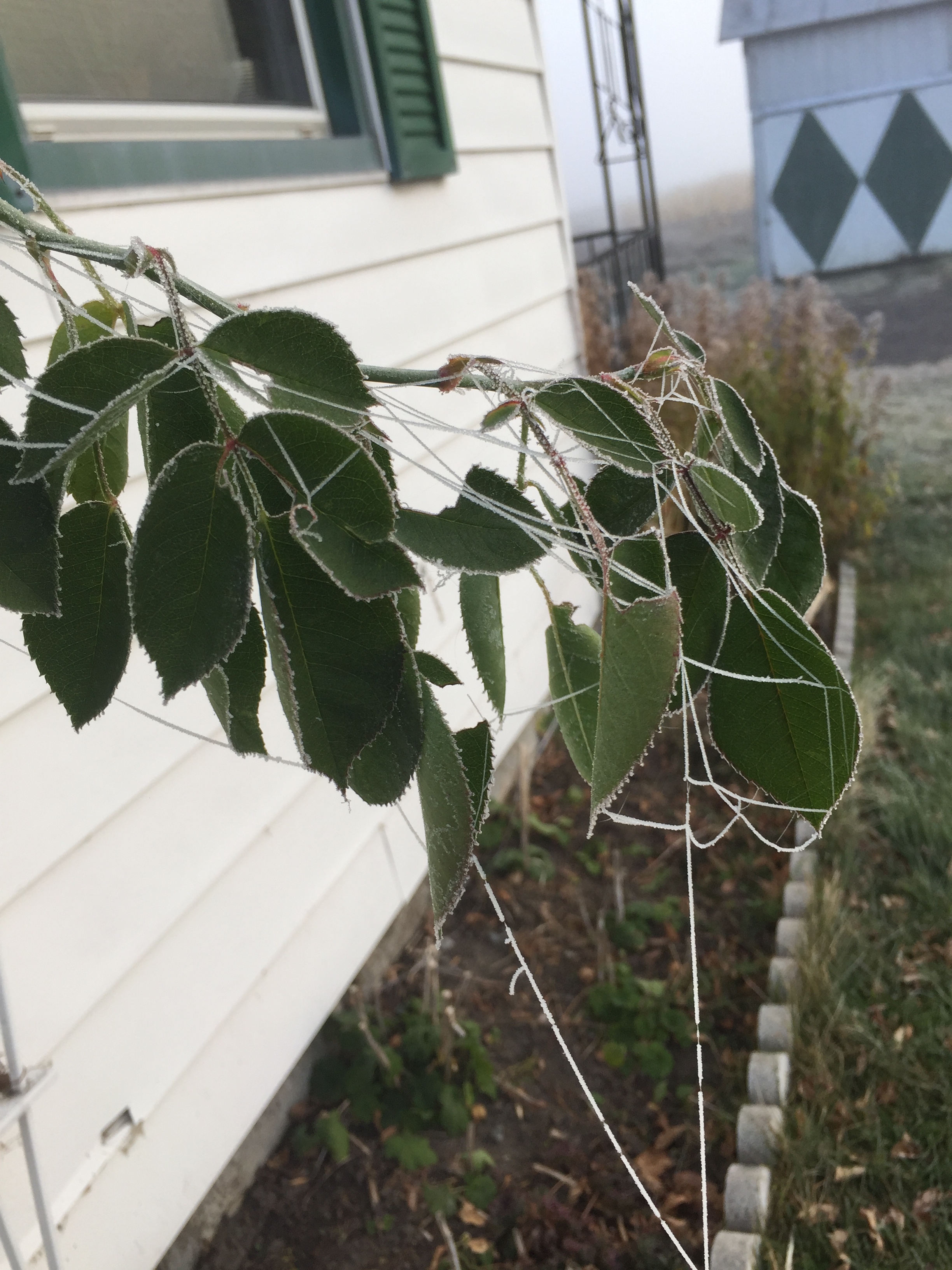 Disclaimer #1: This post should probably be two separate pieces but my mind has sown them together into a creepy blanket of disjointed patterns. You’ve been warned. I feel better. Let’s move on, shall we?

The picture for this post was taken early last week. I was out with my dogs and running back towards the house to escape the cold when this plant caught my eye. Actually it stopped me in my tracks. My first thought, “Silly String! Awesome!” was quickly replaced with, “Frozen spider web! Ewwww!” But the more I looked at it, the more I became mesmerised. The wind and morning frost had inadvertently created something beautiful from the crude side of nature.

There’s no denying, the words “beautiful” and “nature” are practically cannibals, feeding on the essence of each other. Or possibly mocking themselves. Throw in the word “crude” and you’ve got the cast for Deliverance in words.

If you’re under 40, Deliverance is a disturbing movie that depicts nature at its most obscene. Whether you’ve watched this movie or not, just knowing about it forever changes your perspective on wilderness, backcountry locals, and banjos.

Speaking of banjos, music is a wonderful thing. It can denote feelings of celebration just as easily as a broken heart – depending on what radio or satellite station you’re listening to. Combine music with a scene, as masterly as Alfred Hitchcock, and something as simple as taking a shower while in a motel room by yourself is never the same again.

I bet you already know that I’m referring to the shower scene in the movie, Psycho. And although I wasn’t even born when Psycho came out, that shower scene was ingrained in the darkest, scariest, most demonic crevices of my mind at least 20 years before I saw the movie. Possibly longer. And by longer I mean I may have been born with that scene in my repertoire of phobia-induced phobias.

Did someone mention the word “demonic”? Here’s a question for you: Who is the most demonic of them all? Why Satan of course! And a list of creepy movies just wouldn’t be complete without mentioning what may possibly be the most profitable of all horror movies: The Exorcist.

I remember as a tweenager, and therefore too young to see this movie, listening to the older teens talk about it. I was intrigued but not enough to put myself through the torture of sitting in a dark theatre while watching what was rumoured to be based on true events. I KNOW. Creepy, right?

But you don’t have to go see a horror movie to be creeped out. Or at least I don’t have to. Last night I was speaking with one of my daughters who is reaching an awe-inspiring level of success in her career. Totally unrelated yet relevant, she’s almost famous. And by unrelated, I don’t mean that she’s adopted, I just mean that what I’m about to say has nothing to do with creepy movies – and everything to do with nature and beauty and spiders and maternal instincts.

During our telephone conversation, said nearly-famous daughter: “I don’t think I could have done it without Nick.”

“It” being the completion of a very labour-intensive project.

“Nick” being a source of encouragement and guidance in her career.

After our conversation I got to thinking about what my daughter said and the mother side of me decided that my daughter – my ADULT daughter, because no matter how old our kids get, they’re always our kids – needed to hear something. Rather than explain it, here’s our text conversation … 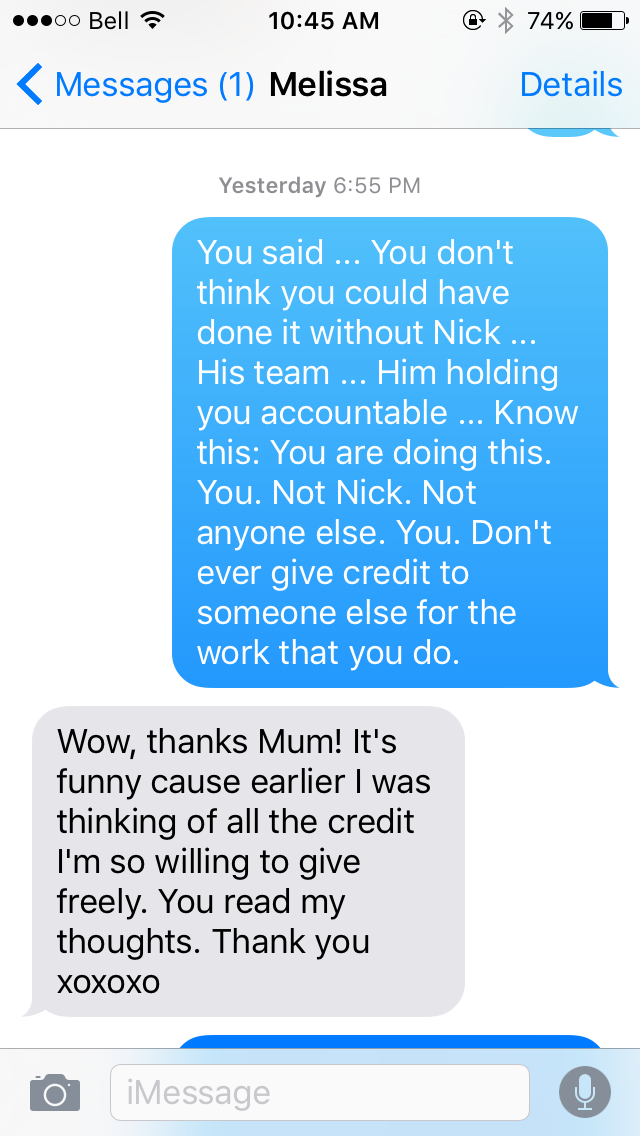 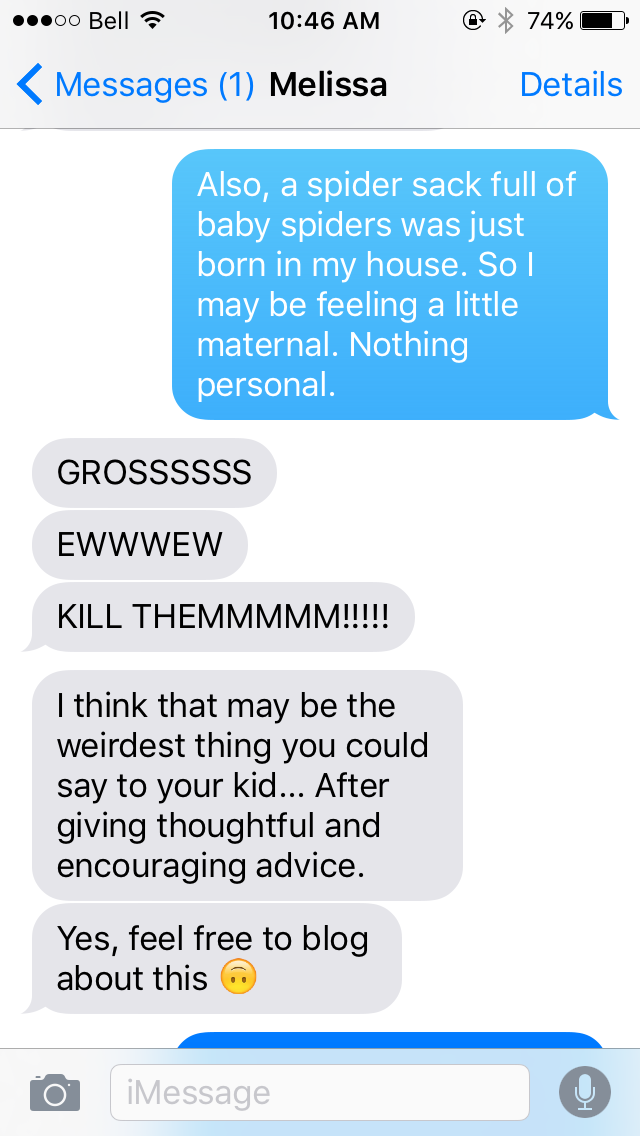 Disclaimer #2: Spiders were killed during the writing of this post.