You are here: Home / Dating / When somebody sends you dead body parts that turn into a nice surprise 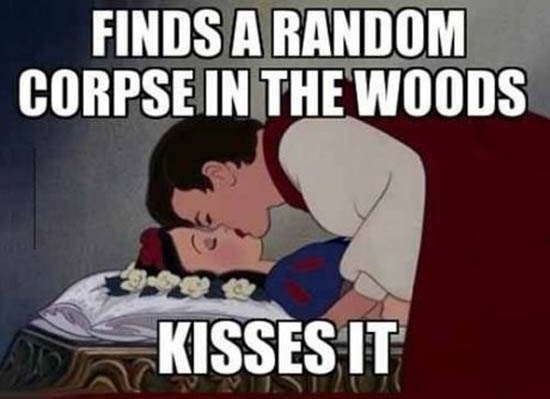 Update on my very exciting life … I’ve been sick with a cold. Not to sound like a baby or anything but A VERY BAD COLD.

The last almost-week has been strange for me because I don’t usually get sick. Another theory is I do get sick but then just forget. Regardless, I try not to complain when I’m sick. Key word: TRY. Because there’s nothing worse than a whiny sick person.

Unless if said sick person is yourself. Then it’s not actually considered “whining”. It’s more like expressing your feelings. And where I come from talking about how hot then cold then hot then cold then hot you are is a form of expression. And so is giving the bacteria that’s invading your body a pet name. Such as the pet name I’ve given this bout of being sick: “my meningitis”.

I’m sick. You’re up to date on my life now. You may resume.

Oh wait! You’re not up to date at all. Here’s another piece of news. For the past I-have-no-idea-how-long (Weeks? Months? Hours?) I’ve been hanging out with a new friend. We’ll call this new friend “Alex”. Mostly because that’s his name but partly because it sounds nicer than calling him “my meningitis”.

I mention him because all week he’s been telling me to, “Suck it up, buttercup.” Except that he’s an IT guy and doesn’t usually use commas. His texts look more like this:

Suck it up buttercup

Which technically, MAKES NO SENSE AT ALL, ALEX.

Okay now you’re up to date. Except for the part about what happened today.

So here I was sitting on my couch with my laptop and blankie, sneezing, coughing, trying desperately to think and breathe and all that other stuff that I usually classify as having a productive day, when all of a sudden I see a Purolator truck in my driveway.

My first thought, “Great. He’s probably lost.” To put this into context, I live in the middle of no man’s land.

Then there was a knock at my door. Naturally my next thought was, “He needs directions. Ughh. I’m sick! Why is he bothering ME???”

But when I answered the door he was holding two boxes taped together with crime scene tape and, spoken like a true professional, he said, “Miss Mona?”

Standing there wearing three pairs of socks, a scrimped-up blob of tissue shoved up each of my nostrils, and wheezing like the dying person that I was – or felt like – I was like, “Whoa. How do you even know my name, YOU FREAK?”

Except that I didn’t actually say that out loud because it’s hard to talk when you can’t breathe. What I did say was, “Um … I think so …” (Remember. I’m SICK. And delirious.)

He then hands me this etch a sketch thingy to sign my name (and by the way, you CANNOT shake the stupid thing when you make a mistake with your signature), then hands me the two boxes and quickly turns around to walk back to his truck. Except that it wasn’t exactly a walk. It was sort of a run.

Just then my phone *dings* to tell me that I have a text. It’s from my friend, Alex. The one I mentioned earlier. He was texting me about something I-can’t-remember so I tell him about the strangest thing that just happened, referring to the delivery guy from Purolator.

As you can see from the following text, my fever was in charge of my suspicious thoughts. 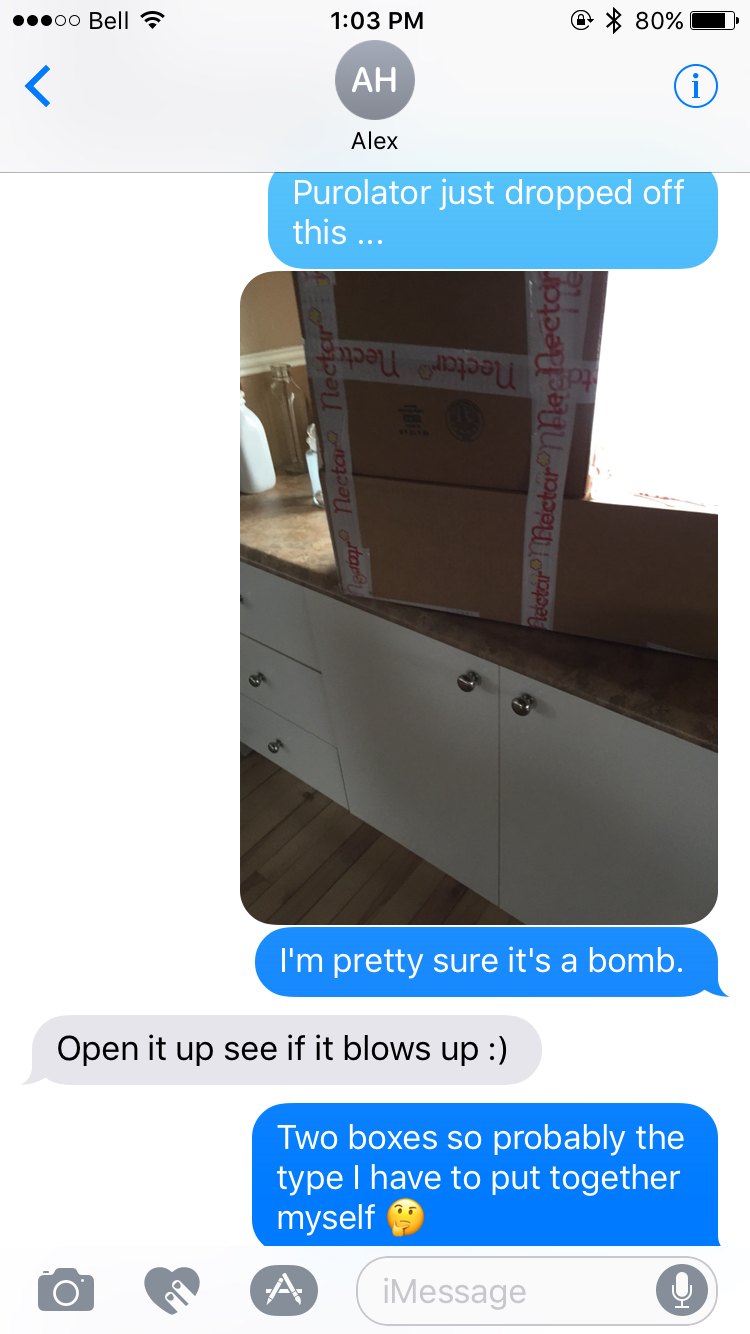 At first I was sure it was a bomb. And a pretty serious one if it came in TWO boxes.

This was bad. Very, very bad because just as I realized that this didn’t make any sense (who would send someone a bomb with the intention of blowing them up AND expect them to put it together???), my fever got worse. Or more apprehensive. 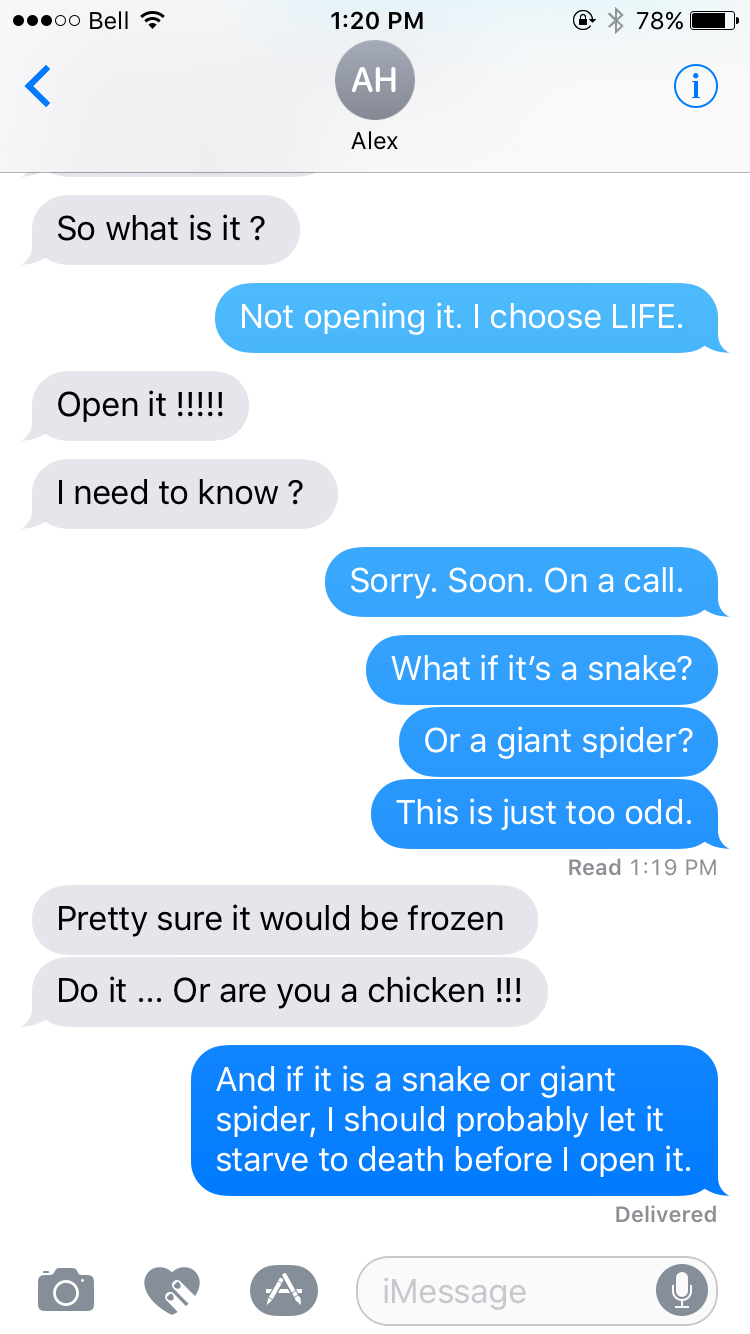 I refused to open the boxes until I had completely inspected their exteriors. 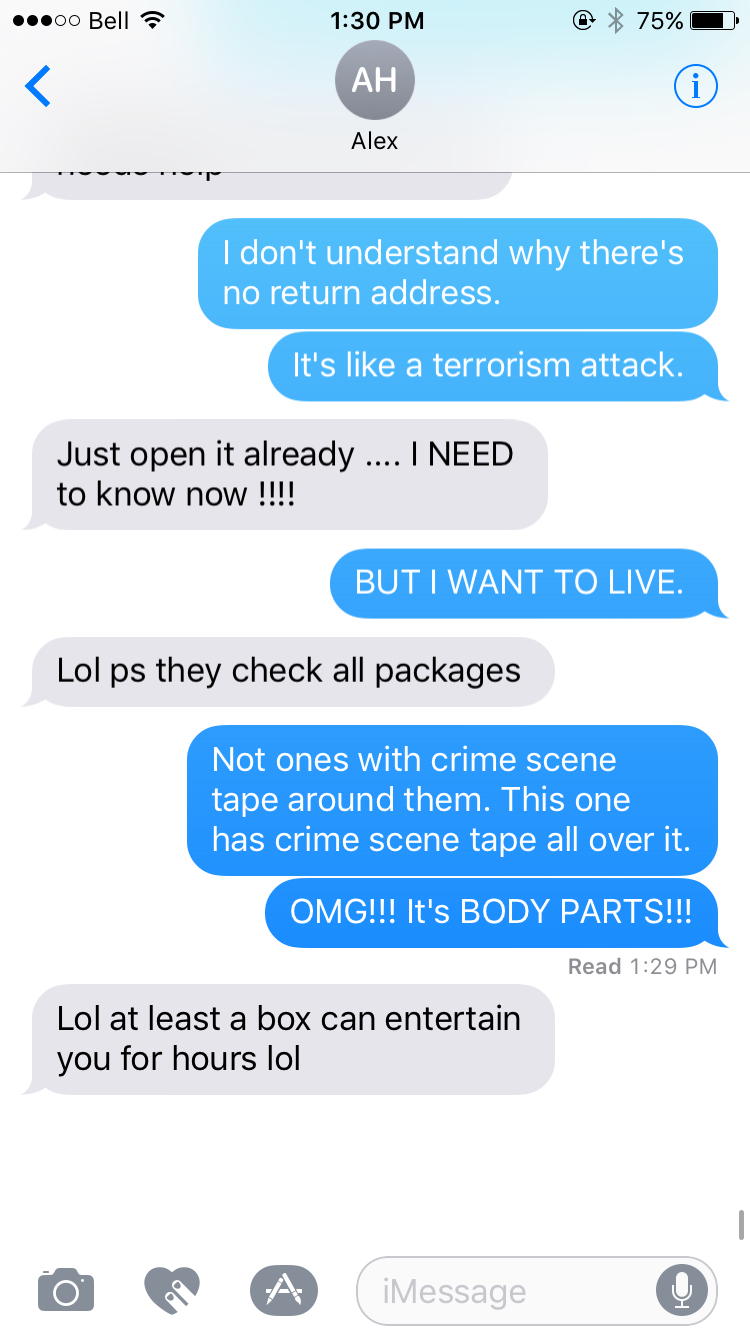 And then my fever had another thought. 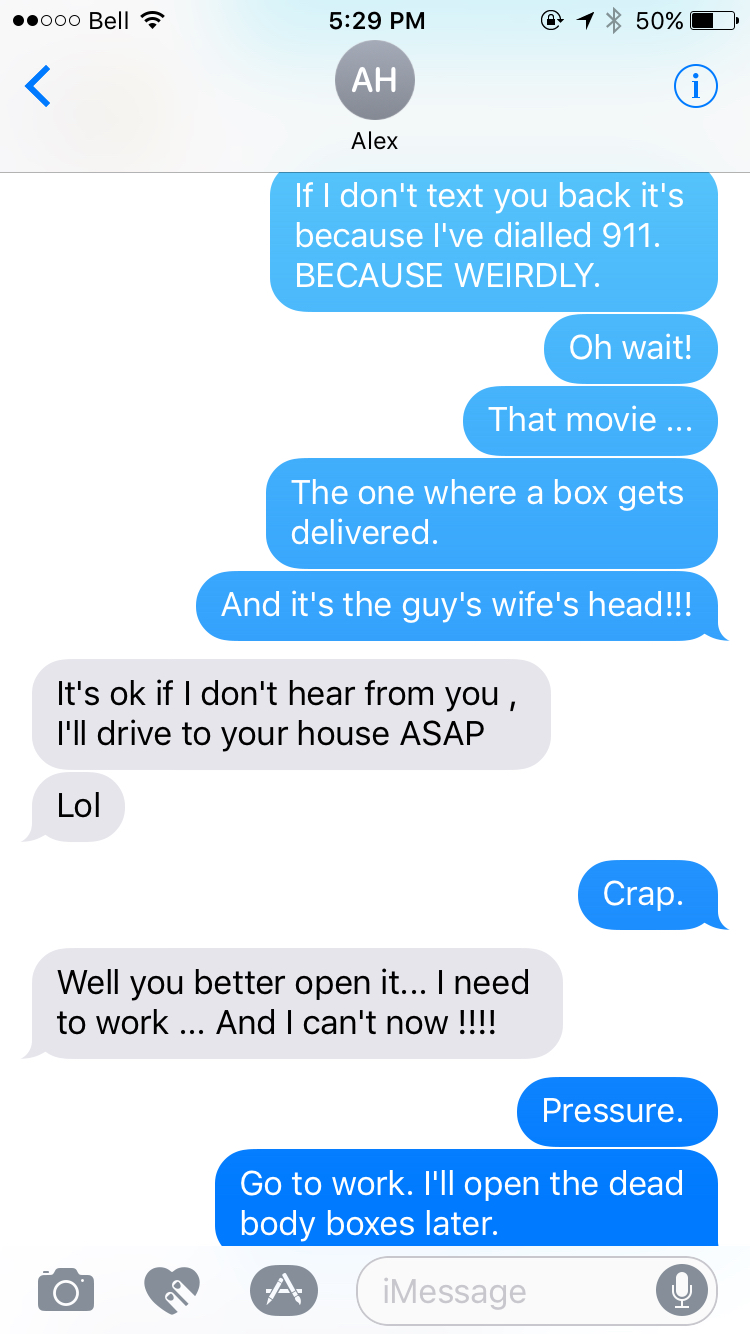 So finally I opened the boxes and they in fact did not contain a bomb that I had to put together myself. Or a snake or giant spider. And in case you’re sitting on the edge of your seats, awesome readers, not a single dead body part could be found.

Flowers and a lifetime supply of chocolate!!! 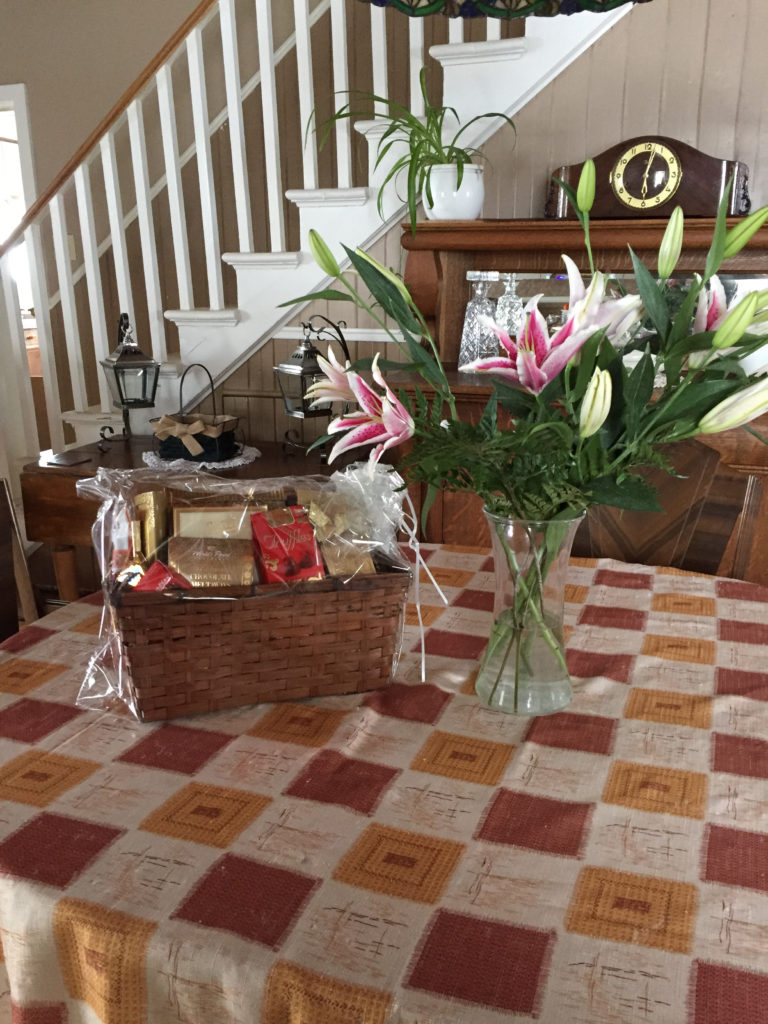 And do you know who it was all from?

Who’s been telling me all week to suck it up?

If you guessed the Purolator guy, you would be incorrect.

But for those of you who guessed my friend, Alex, you would be correct.

Admittedly, I could feel myself blushing with surprise. Or delight. Although it may have been my fever.