You are here: Home / Memory Lane / An essay on random acts of kindness. OR … Kindness. Let’s spread that shit on everything. PART 2 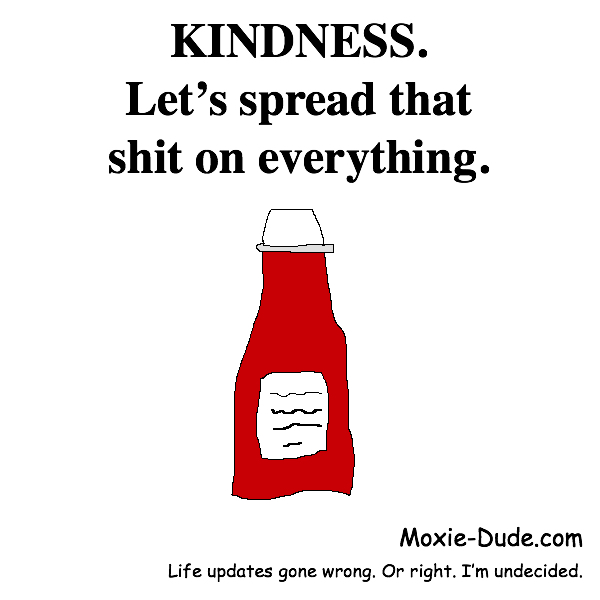 In case you haven’t had a chance to read Part 1 of this series, you can go catch up here.

Just to clarify, when I originally wrote that piece I had no idea that it would turn into a series. I thought, “an update … maybe,” but a series? Na.

Here’s what happened after that post went live … people (mostly strangers) reached out to tell me about nice things they’d recently done, heard about, or seen. And they were truly touched (in a warm and fuzzy way).

Do you know what this means, awesome readers?!! It means there’s still a high level of compassion and kindness in this world! Not to get political or anything, but this is IN SPITE of all the political bull crap and wars on wars, etc.

Now that’s what I call NEWS. Or NESW. (If you don’t know what I’m talking about, go read that other post.)

So, while the original post was inspired by the question, “WHAT IS HAPPENING TO OUR HUMANITY???” I’m happy to report that kindness is EVERYWHERE.

Yes, there’s a lot of demented crap out there too but let’s focus on the good, shall we?

During summers when I was a kid, I would spend a few weeks at sleep-away camp. One summer will forever have a special shrine in a corner of my mind.

I was about nine or ten at the time so I don’t remember all the logistics but I do remember that there were lots of girls. Girls that didn’t go to my school because they lived “somewhere else”. Girls younger than me. Girls older than me. We all loved horses and when it was raining we all loved to play cards. I especially remember one girl, we’ll call her “Billy” because it almost rhymes with bully, which is how I came to know her.

Thinking back, Billy was downright mean. She was a little older than me at the time (14 or 15). And she was taller and bigger than a lot of the girls her age. (She even had boobs.)

Billy would pick on people just for the fun of it. To give you an idea, there was this one day where she singled out a girl named Pamela and laughed at her for the way she was eating an apple (true story).

“You eat your apple like a baby,” Billy had taunted.

Another time we were told to get into groups of four and Billy downright told Pamela – the same Pamela – to, “go away … nobody wants to hang out with a baby.”

You get the picture, right? Billy was a bully. We were all afraid of Billy and she was smart enough to appear angelic and helpful when the camp monitors were in hearing distance. Clever girl, that Billy. We hated her.

And then this happened …

Billy got her period.

“Come on. SOMEBODY HAS TO TELL HER.”

“What’s going on? What are you all talking about.”

Suddenly we stopped talking. Billy had walked into the cabin where we were having this important meeting of the who-will-tell-Billy minds.

The breath was sucked out of the room and we froze, eyes wide and full of fear, as though the first to speak or move or breath would either be: *Insert music from cheesy horror movie*

a) The next victim on Billy’s bully list, or

b) The one that would have to tell Billy about the growing red stain on the crotch of her light beige shorts.

The moment lasted for about sixty-seven THOUSAND hours.

Finally, Pamela (yes, the SAME Pamela) stepped out of our circle and walked towards Billy saying, “Billy, you should tell her. You don’t care about hurting other people’s feelings.”

“Tell who, what?” Billy asked.

“Julie snores and no one wants to tell her,” Pam answered.

Billy laughed boyishly. “Where is she. I’ll tell her,” she gloated, as though she was about to become the superhero of this dilemma.

“I know where she is,” Pamela said and they both walked out.

None of us saw Pam or Billy for the rest of the day. Call it “girlish imagination” but some of us even suspected that maybe Billy had attacked Pamela in a fit of embarrassed rage and killed her.

Meanwhile, the day went on. We swam. We hiked. We played games. But mostly we wondered if Pam was dead and if Billy was hiding. By this time, we had told Julie about the fake snoring story and warned her that Billy was probably going to embarrass her. (Julie was not impressed.)

As was the routine of every afternoon at camp, we all met in the cabin we used as a kitchen, consumed by hunger and on this day, also consumed by fear mixed with a little curiosity. (We had all convinced ourselves that Pamela was dead and that Billy was a fugitive on the run. She was a murderer AND had her period. Gross. And hopeless.)

Low and behold, we walked into the kitchen cabin and sitting together at a table in the farthest corner were Billy and Pamela. They were playing cards. No one in our group spoke. We just stood there, trying to act “normal”. If there’s one thing that stands out when you’re trying to make sure that nothing stands out is trying to look “normal”.

It was Pamela … beautiful ALIVE Pamela … that saw us first and waved for us to come sit with them. Billy, we noticed as we walked like confused soldiers toward the table, was wearing a different pair of shorts.

“Me and Billy didn’t feel good today so they let us play quiet in here,” Pam explained. She avoided looking at any of us in the eyes by focusing on the cards in her hand. No one said anything. Pam was lying. Her and Billy were now best friends. Apparently. And Billy had her period. As you can imagine, the moment was awkward.

“Sit down.” Billy ordered. And we did, quickly and thankfully because obviously, things were going to go back to normal. Sort of.

We were especially thankful that no one was dead and no one had to try to avoid looking at Billy’s crotch since clearly “that” had been taken care of. (Admittedly, I had no idea what taking care of “that” meant. I was just happy that I didn’t have to fight my eye turrets syndrome anymore. Parenthesis within a parenthesis: there’s nothing more gauche-feeling than fighting with your own eyes to stop looking at someone else’s private parts.)

Later that evening I asked Pamela what happened.

“I pretended to ‘just notice’,” she answered. “That way Billy didn’t have to feel like the WHOLE CAMP knew.”

The truth is we never knew if Billy believed Pam’s story about just noticing the growing stain on her shorts. (When Pam and Billy had turned to leave the cabin in search for “snoring Julie”, the stain had crawled up the backside of her shorts and looked like a murder scene.)

But one thing was for sure: that one, simple act of kindness … the one where Pamela told Billy in secret about what was going on in her underwear, was not lost on Billy. After that day and for the rest of the camping trip, Billy was a little nicer. Not totally nice but less mean. And as the rest of us became a little less afraid of her, a momentum seemed to grow (not unlike the stain on Billy’s shorts), where the less mean Billy became, the more we included her in our girlish talks. It was like a circle.

And all because of one girl’s simple – although brave – act of kindness.

We’ve lost contact over the many years since that summer. I have no idea if you’re even still alive. But where ever you are, you made quite the impression on me that day. On all of us. You were kind to a girl that was mean to you. You could have easily used the situation into an occasion for revenge, but you didn’t.

I don’t know where you are either in your life but while you started out as “the mean girl” that everyone fearfully hated, you did turn out to be open to kindness, which shows that deep down in that bully-heart of yours, a part of you was waiting to be approached.

I’m very happy to have witnessed it. It touched me (in a warm and fuzzy way).