You are here: Home / #KitchenFails / The story behind this leek 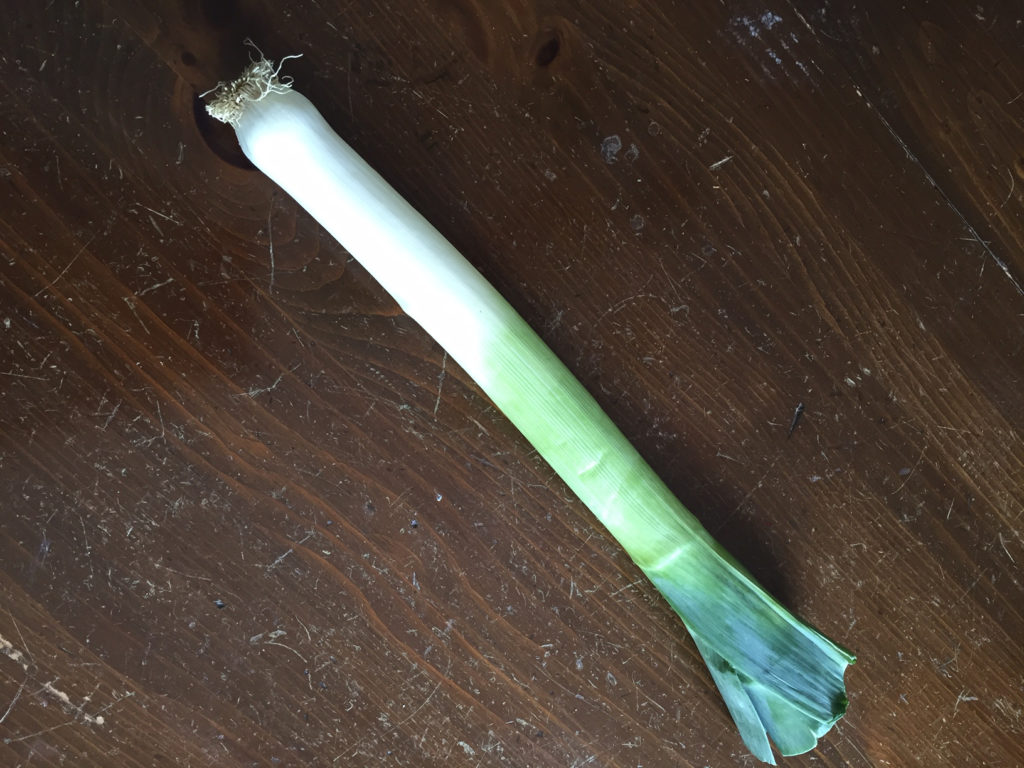 Have you ever set your mind to doing something and then thought about another time that you tried to do something similar and remembered how you just ended up with a kitchen counter covered with dirty pots and pans? Oh and let’s not forget a couple of dogs (that usually eat ANYTHING) pretending to be asleep so that they won’t insult you when even they can’t help themselves from turning up their noses from the mess you’re passing into their bowls … only to conclude that THERE’S NO WAY I’M DOING THAT AGAIN?

Let me start from the beginning.

The other day my mom came over and while I was busy making tea and telling her about my day (and not paying attention to the grocery bag she walked in with), she was busy emptying the content of said bag on my kitchen table so that when I sat down with a tray of cups and lemon I was greeted by what I thought was a titanic-sized shallot. Yes, the one pictured above.

“I bought this for you,” my mom said. She didn’t have to interrupt me because I had already stopped talking.

As you can imagine I was a little shocked by the sudden appearance of this unfamiliar vegetable. Oh sure, I’ve walked by them in the grocery store on my way to less exotic forms of vegetables but never have I actually stopped to look at one. And especially not in my own kitchen.

To which I was corrected when my mom clarified that it was not a giant shallot but a LEEK.

In my defence, it’s hard to come up with a response when you’re in a state of confusion. And so to help myself out of this muddled state I asked again, “But why?”

My mom’s answer only helped to further my incomprehension of this giant shallot, now known as a “leek”, lying on my kitchen table as though it was a perfectly normal thing … as though leeks always lounge on kitchen tables and it was time I joined the club with a leek of my very own. Or something.

My mother’s response only succeeded in adding to my confusion. “It’s for your soup.”

“The soup you’re going to make.”

And then my mom took a sip of her tea and proceeded to tell me about her day and how she “came in third at bridge”. And since I don’t play bridge and have no idea what coming in third means I responded with, “that’s great. But WHAT SOUP?”

“Potato and leek soup,” she clarified.

Only she didn’t really clarify anything because after she left I went online and Googled ‘potato and leek soup’ on the internet and while pictures of the end result did look yummy, I realized that the steps to get there were sooooo complicated and then I started thinking about other times I’ve set my mind to trying to discover any smidgen of inner kitchen talents I may have missed (and we all know what mess those resulted in) so I gave up.

All that to say that there’s a leek taking up space in my fridge and I’d be happy to find it a good home. Send me an email if you’re interested. Just don’t tell my mom, okay?