You are here: Home / Hamster Ramblings / Trump and Pope. I have questions.

So let’s begin by saying that whether you know me in real life or follow me online, you’re aware that I don’t do politics. Just the word – politics – summarizes a sense of ridiculous entertainment.

And then THIS picture. And by “THIS picture” I mean the picture above.

Shall we discuss the wrongness of it? Because I’m having a really hard time trying to erase it from my eyes and I think that if I get some stuff out of my mind it will help me move on.

OMG, awesome readers! I think this means you’re my therapy. Kudos. And thank you.

First of all, why is trump (no title case on purpose) the only one smiling? There are two females to his left … or his right and our left … that look like they’re going to their own morbid funerals. Then Exhibit B, trump’s other side, showcases the pope with a very clear expression on his face as demonstrated below: 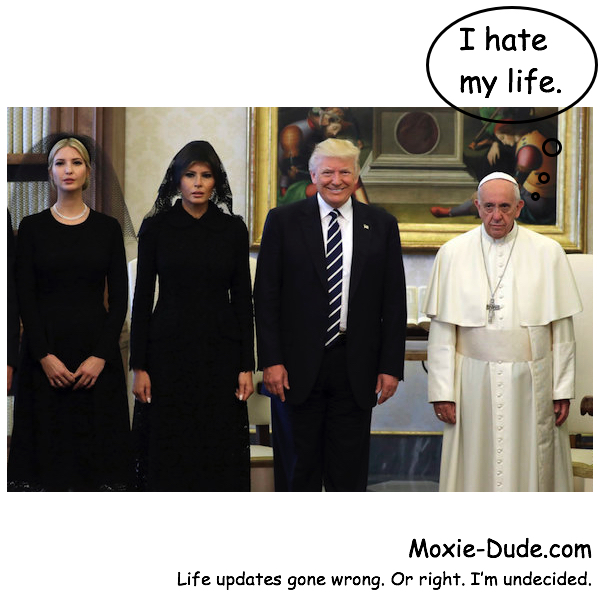 I’m pretty sure that before this picture was taken, the pope was having a pretty good life. I mean, his job involves travelling and reflecting Jesus’ love for people. (I didn’t make that up, y’all. I Googled it.) Except according to this picture, it’s pretty safe to assume that the pope does not put trump into the category of “people”.

So if the pope is all goodness and the trumps are a three-ring circus, this puts them all on a pedestal of celebrity status. And like all photo shoots of this nature, a gazillion pictures would have been taken whereupon the very best is selected for public distribution. Which brings me to this question:

THIS IS THE BEST PICTURE OF THE DAY?

Oh wait! I can answer that.

No. This is not the best picture of the day.

THIS is the best picture of the day … 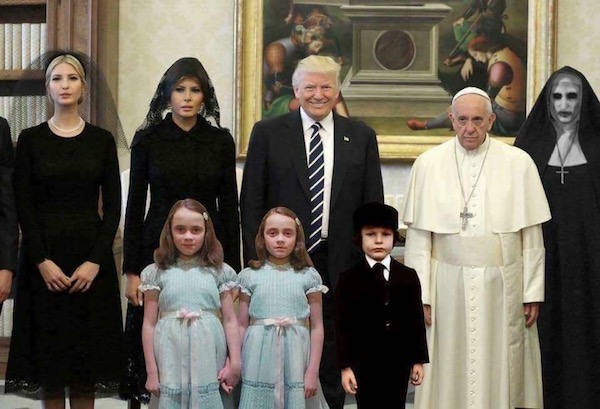 I don’t know who Photoshopped this but it says a lot.

Suddenly I get it … politics … religion … life and death … I understand it all.

Actually, that’s not true. I don’t understand anything.

The wife and daughter of the president of the United States look like they’re on their way to walk the plank to their own funerals. The president himself is sporting an evil smile of abomination. And the pope clearly wants to reprimand someone. Possibly everyone. Instead of a loving smile, he’s casting the same look my parents had when I was in trouble.

And since I don’t follow politics OR religion … I have to ask:

Are we in trouble?