You are here: Home / Kids / I don’t have a title for this post so instead I’m asking a question: What would you have done? 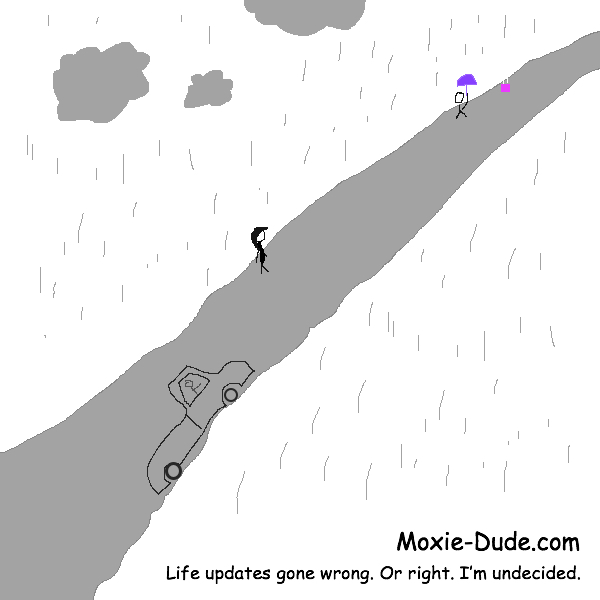 (No exclamation mark today. This post is of a serious nature. Ish.)

Something happened last week that began as something I would classify as “potential evil”. As a writer, it’s my duty to take you on a journey. And in doing so I like to put words together that create a string of emotions. In some cases, cliff hangers. But this post is different. Before I get to what happened, I need to tell you upfront that what I was faced with was not in fact evil. The evil existed only in my head for a brief time. And by brief, I mean the amount of time it takes to walk about eight blocks.

And so here begins the journey …

I’m not sure what you were doing last Tuesday but I know what I was doing. I was driving to pick up “my little man” – my grandson – from school. To give you context, there is no context. It was a rainy day in the suburbs of Montreal. Nothing out of the ordinary. Just another day. Possibly exactly like your Tuesday afternoon, except with your own collection of details.

Driving, noticing lawns comprised mostly of uncut grass because of all the rain lately, I had no expectations for the day except for where I was going and what I was doing.

Then this. And again, know that there is no evil in this story. Just lessons. I tell you this because I don’t want to lead you down a path of anger or fear. We all know this world is fucked up. This is not one of those stories …

I turned left at the stop sign about 100 meters from my little man’s school and noticed two things. First, a little girl holding a purple umbrella over her head. She caught my eye because her walk included the frustrated diversion of kicking her lunch box forward along her path.

The second thing to catch my eye was a man sitting in a truck. He was watching her.

As you can imagine, my spidey senses got all tingly and ugly. I wasn’t sure what I was seeing. Was I witnessing something before it happened or was reality a blur caught between my imagination and the falling sheets of rain?

I turned onto a side street, stepped out of my car, and with a purpose I’ll describe as, “not today, asshole”, I pulled my jacket hood over my head and started walking in the same direction as the little girl.

Grey as they day, black as my raincoat, my perception was muddled but I couldn’t let this go. Leaving everything in my car – my purse, my cell phone – I just started walking.

I know. Outrageous, right? I mean, who am I? A stranger. A grandmother on her way to pick up her own handful. But somehow that truck … that parked truck with the man looking at the little girl … Suddenly “who am I” wasn’t even a question. In fact, there were no questions. My eyebrows had ceased to rise. My face was stone cold. I just walked, aware of only two things: the little girl ahead of me and the man in the truck slightly behind us.

The little girl, protected from the rain by her purple umbrella, continued to kick her lunch box along her path to home, wherever that was, I had no idea.

Every once in a while the truck moved. I could feel the rumble as he pulled up, always staying a perfect distance between fully visible and vaguely in our space. Without a phone, paper, or pen, my mind was consumed with one thing: remembering the letters and numbers of his license plate. I had a plan. Well, actually it was more like scenarios and I had two of them.

Scenario one had me following the little girl home. I would knock on her door after she had walked in and I would quickly tell her parents to write down the letters and numbers overshadowing my other thoughts. And then I would yell at them for letting their kid – five or six years old – walk home alone. Okay, maybe not yell. But be very, very convicted in the target of intentions I had just witnessed.

Scenario two simply had me seeing the little girl walk safely into her house and me walking over to the man in the truck, reaching into his open window and poking his eyes out with my car keys.

As it turns out, my deed lead to none of these.

Suddenly, the rumbling passed me on the street and pulled up beside the girl. She closed her umbrella and climbed into the truck. Clearly, she knew the man. Standing in my spot, eyelashes drowning in rain and partial disbelief, I watched. I was barely aware of what to do next. I mean, almost every time you hear of an abduction the story tells you that “it was someone they knew.”

“Do I run and jump into the box of the truck?”

My body was frozen, frenzied by thoughts.

And then the white lights lit up. You know the ones. They tell you when a vehicle is backing up. I didn’t move as I watched the brake lights come on and the man get out of his truck. As he ran towards me he was tugging at something in his pocket. It was his wallet.

The conversation was in French but I’ll translate. He was showing me his ID. “I’m her father,” he said. “And I know what you’re thinking.”

Then he went on to tell me with a face full of emotion, about how his daughter had been kicked off the school bus for a week due to misbehaviour. He had warned her that if it happened again, he would make her walk home. The consequences to her actions.

“I know what you’re thinking,” he said again.

“I was protecting her,” I said.

“I know.” By now the man was fully crying and his voice was cracking. “Thank you.”

While the father was on a mission to teach his daughter an important life lesson, he and I were the ones to learn the most that day: that even though this world is fucked up, there are still good people out there. I saw it in the father and he saw it in me.