You are here: Home / Hamster Ramblings / A tribute to my favourite teacher 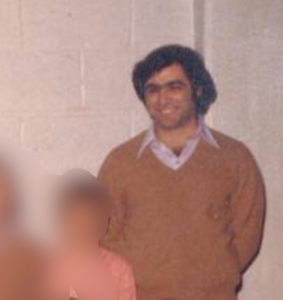 My laptop and I were sitting on the couch last week, working on something entirely unrelated, when I suddenly found myself on Facebook between paragraphs. Long story short, I learned that my all-time favourite teacher has passed away. And not only has he passed away, but I was told that “he died many years ago.”

Suddenly my brain was hit by lightning, causing past and present to rear-end each other right there in the middle of my head. Bumper to fender, it was a pretty big collision … at least to me.

His name was George Aboud, although at the time I knew him as Mr. Aboud. He was my grade five homeroom teacher, and even though that was a VERY LONG TIME AGO, his footprint remains in a fond corner of my memories.

Why? I’m not sure. Possibly because I knew him during a time when I was both the salt of the earth and a grain of salt on the earth. Important and insignificant.

Maybe it has something to do with “that day”. Oh and then there was “that other day.”

Get comfy in your chairs, awesome readers. We’re about to go back in time …

You get the picture. It’s a different world.

While I remember myself as a shy, hesitant child, there’s one activity that always triggered a ruckus in my house: getting dressed.

My mom would want me to wear something “pretty”, or “picky” (to me, anything that wasn’t made of cotton was picky), and I would throw a tantrum. I’m not sure where the expression comes from – throw a tantrum – but it’s well-worded. It describes one’s ability to fling their angered emotions across a room with such velocity that their sentiments stick to the wall like over-cooked spaghetti.

I would do that. Hard to believe, I KNOW. But it’s true.

Yet somehow on this particular day my mother managed to win the battle. I’m imagining her exhaustion from having to tame my stubbornness but somehow, the morning routine ended with her ushering me onto the school bus wearing … wait for it … a DRESS. It was both pretty and uncomfortable because I was also wearing white tights.

If you’ve never had the opportunity to wear tights let me take you there. Think of a weave of spiders anxiously clinging together and stretched tightly across every inch of your naked legs. Words to describe the sensation of tights: creepy, itchy, why-were-tights-even-invented.

The dress was yellow and tied in the back into what I imagined looked like a disturbing bow trying to pass off as angel wings. I felt ridiculous.

I arrived at school and my three best friends at the time, Judy, Julie, and Roberta, had nothing to say about my dress. Actually they had a lot to say. As I walked toward them I could see their eyeballs darting in each other’s’ directions like a goldfish bouncing off the glass walls of a fishbowl.

To help you understand the context of that day … basically, my life was over. (Thanks, mom.)

I couldn’t sit at my desk the way I liked, with my heels on the edge of the chair and my knees holding up my chin. Why? Because DRESS.

I couldn’t go high on the swings during recess or climb the monkey bars. Why? Because DRESS.

I couldn’t play dodgeball with everyone else. Why? BECAUSE DRESS.

While I was busy feeling painfully uncomfortable, the dress was stealing away my life. I wasn’t me. I was DRESS and creepy, white tights.

It was the middle of the afternoon, a hot day I remember, and suddenly Mr. Aboud suggested that we go out in groups of five or six to get water. Keeping in mind that what we know today as “the water bottle” was known back then as “the water fountain”. There was one outside of our classroom, down the hall.

My group was up next and as I was halfway out the classroom door, Mr. Aboud called my name. I stopped in mid-track and turned toward him. He was sitting behind his wooden desk.

“You look very pretty today,” he said smiling from across the room.

Everyone else in the class, the ones that were not in my water group, lifted their heads from whatever grade 5 math problem we were working on and looked at me. It was at this precise moment that I recognized the sound of embarrassment. It was like bombs exploding in my chest.

His five words – You look very pretty today – echoed off the walls of my inner eardrums to another beat that said: My. Life. Is. Officially. Over.

I stood frozen to my spot in the middle of the doorway for about a year. One by one, I had time to look into the faces of each of my class mates.

I think they were waiting for me to say something (thank you?) and I was waiting for them to laugh.

The silence was both welcoming and deafening. Suddenly the room started breathing again and I realized that maybe, just MAYBE, my dress wasn’t as dreadful as I had been imagining all day.

Also, maybe my life wasn’t over. After all, Mr. Aboud had said I looked very pretty.

The second memory that resides in my head with Mr. Aboud marks a turning point in my life. It was the first time that I felt the abruptness of change.

The good thing about being eleven years old is that you don’t really know when you’re being emotional because you’re too busy being self-absorbed to be self-aware.

I don’t remember how we – my brother and I – were told but somehow it was communicated to us that we were getting a divorce. We, being my parents.

Then there’s a gap in my memories because the next thing I remember I’m sitting in a class – French class – and my soul is uncontrollably trickling out of my eyes. I couldn’t stop it.

Holding my forehead up with scraggy arms, I was pretending to read a piece of paper on my desk. A handout from the teacher. I remember feeling grateful for my long, stringy hair that was acting as a shield.

I thought I was being discreet. I thought no one was noticing. That’s the thing about being a kid. You wear so much of yourself in the wide-open spaces of your surroundings; not realizing the obviousness of your existence. You’re blind because you’re simply too young to understand anything except the goodness of chocolate and the anticipation of jumping in a swimming pool. When you’re a kid, these are the in-the-moment experiences that have meaning. Life is simple and complicated at the same time. The gift is that you don’t yet realize the depth of its complications.

Somehow the French class ended. It was a rainy day and lunch time was spent inside instead of in the school yard. I don’t remember what the inside of the school looked like exactly but I remember standing in the hallway looking out and down. Looking outside? Looking in the air? I’m not sure. I was mostly looking at the thoughts that had accumulated inside my head.

The next thing I remember is seeing Mr. Aboud walking towards me. It’s lunch time so he really shouldn’t be there. He sees me see him and without saying a word, takes my hand as though I’m a child. I AM a child but as though I’m a small child, and we walk into a nearby room I didn’t even know existed because the door to said room was always closed.

Turns out it was the nurse’s room, occupied by a small bed and a few chairs.

Mr. Aboud gently ushered me to sit on the edge of the bed, pulled up a student-sized wooden chair, and sat opposite me so that my skinny knees fell between his man-legs. The room was tiny and he could do all those things at the same time, like a friendly giant in a dollhouse.

I remember watching his mouth move but couldn’t hear anything that he said. I was too focused on the question rising from his dark, bushy eyebrows. Suddenly the room is filled with uncontainable sobs and it takes a moment before I realize that they’re heaving from me. It’s my body that’s making those noises.

“I’m not allowed to tell.” The words I keep repeating to his eyebrows.

It seems ridiculous to me now but for some reason I had it in my head that “the divorce” was a big secret.

I’m not even sure that I understood what the word “divorce” meant except that everything – EVERYTHING – was about to change. My world as I knew it was falling apart.

Mr. Aboud was quiet. He let me cry and then I imagine that he gave up on trying to pry the secret out of my ironclad demeanour. That’s when he hugged me.

It was awkward and I didn’t hug him back.

And then somehow *poof* the day ended. The divorce happened. The school year marched into June and I never saw Mr. Aboud again.

To this day, living in a treasured corner of my childhood memories, sits Mr. Aboud.

And then last week – during the hours when day become evening – I found out that he passed away “many years ago.”

I hope your passing was quiet. I hope you didn’t suffer.

I suspect you have no idea of the impact that you had on me and how you were my most favourite teacher of all time.

Thank you for your quiet understanding of my awkward sorrows.