You are here: Home / Hamster Ramblings / The homeowners guide to owning a home. Or something. 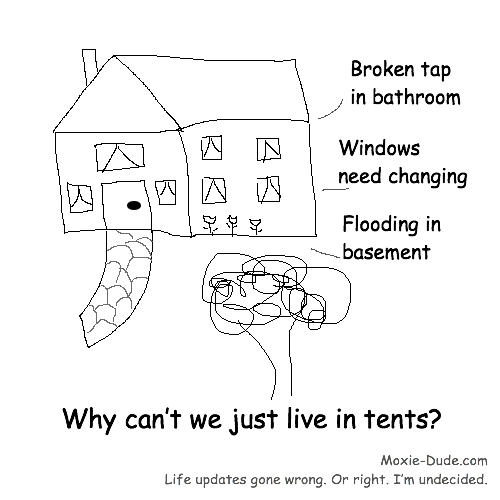 It all began last weekend when I was giving my grandson a bath.

No wait! Actually, this story begins just over a year ago when I moved into this house and realized soon after that there were a lot of things wrong with it. Little things like tree roots trying to break into the house by forcing their way through the foundation and wrapping themselves around pipes like a python around its prey and crushing them until the basement flooded. You know. Little things like that.

But that was last year. Let’s fast-forward to this past weekend. Or rewind, depending on how “in the moment” you are.

It was a hot, muggy day and there was a lot of sun-worshipping in the way of weeding and cutting the grass and watering the flowers so naturally, I was looking forward to taking a cool, refreshing shower at the end of the day. But when I went to turn off the tap after running my grandson’s bath, I noticed that I had to do a bit of jiggling before I could get the water to stop running.

One thing lead to another and the next thing I knew, I was on my laptop, working on what’s come to be known as “the book”, so my someone asked if I minded if he took his shower next. Lost in thought and deep in words, I was happy to oblige.

Then I got the news:

“I think I broke the tap,” my someone said as he came downstairs where I was still – as my mom would say – playing on my computer.

“Na. I noticed there was something wrong with it earlier,” I assured him.

Regardless, I went up to check and sure enough, the bathtub tap was now fully broken; stuck on cold and dripping constantly. My plans for taking a shower at the end of a hot, sticky day were literally trickling down the drain. I had to resort to “an Italian shower”.

With yet ANOTHER repair expense suddenly appearing in my future, I felt exasperated and we all went to bed that night to the delightful sound of running water. (Eventually, “someone” got up and closed the bathroom door. Apparently, the sound of running water makes him feel like he needs to pee.)

The next morning, I woke up with an idea! I took a picture, this picture … 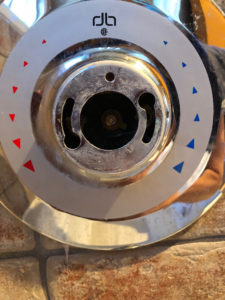 … and headed to the nearest hardware store where no one seemed to recognize the brand. And then one person, an older gentleman who worked there and who quickly became my plumbing mentor, said that it was Aqua Brass, a brand that he wasn’t sure still existed.

“Here,” he said as he handed me something small and black and plumberish. “You need to replace the cartridge and I’m 90% sure that this one will fit.”

So I went home, said a prayer, and proceeded to take off the plate.

“Crap. It’s not the right part,” I said out loud. Frustrated, I took a picture and headed back to the hardware store. First, I returned the piece to get my money back ($70), then I walked up and down all the aisles in the plumbing section. After what seemed like half a day, I finally found my man.

“It’s the wrong part,” I said as I held up the picture of what I had found behind the plate. 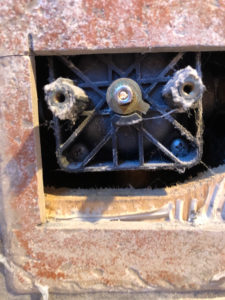 He looked at the picture on my phone, assessed my overwhelming feeling of now-what-do-I-do, and smiled.

“Nope. It’s the right part. You just have to remove that piece and replace what you’ll find behind it with the piece I gave you earlier.”

So I went back to “returns”, re-bought the part, and headed back home to remove the back cover thingie so that I could be greeted by who-knows-what. (Not I. I had no idea what I was doing.)

Once I removed the screws, I realized that I was going to have to break the tiles because they were blocking the part. “Crap,” seemed to be my go-to word of the day.

With screwdriver and hammer in hand, I managed to chip out the grout and remove part of a tile without breaking it. Can we say “miracle”? AND, I removed what my plumber mentor had called “the cartridge and low-and-behold, IT WAS THE RIGHT PART. 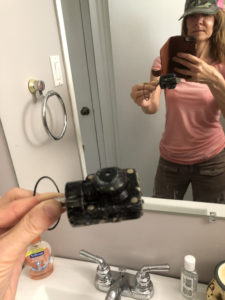 After replacing the old cartridge with the new one, I realized that I had to go back to the hardware store to buy grout. *Sigh*

This time I couldn’t find my mentor (I suspect he saw me coming and was hiding in a demo shower somewhere in the store) so I asked someone else about grout. This guy wasn’t as helpful. He just pointed me towards aisle #16 and walked away. I found the grout and headed home and by this time my someone was awake and inspecting my work.

“Wow. I’m impressed,” he said. Then he told me that before I could put the tile back in place and put grout around it, I’d need tile adhesive. (I thought that the grout would hold the tile in place. Turns out that’s not the case.”

So yes. Back to the hardware store for the fourth time since it opened that morning. *Double sigh*

I got home with the adhesive and my someone took over the job. (Thank goodness because by this time I was ready to move into a tent.) As my someone was bent over, adhesiving and grouting, I mentioned to him that he should pull up his pants.

And even though I was in less than a good mood by this point (all I wanted was to take a damn shower), I had to admit: he had a point. We laughed. We got the job done. And I finally got to take a shower.

So yeah. Now I’m a plumber.

Get notified when new posts are available by subscribing to this blog. It’s easy. Just scroll up and look for the subscription box in the sidebar. All that’s needed is your email address. And know that I hate spam just as much as you so rest assured that I will never – EVER – share your email address with anyone.