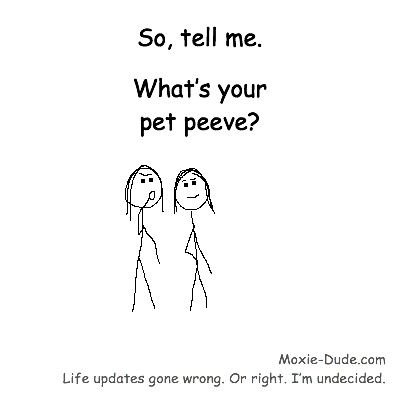 I was in high school the first time I heard the expression “pet peeves”. Along with the “most likely to …” write-ups, year book descriptions for graduating students always included their pet peeves. And while I wasn’t familiar with the term at the time, I just kind of figured it out by what followed.

Maria Sinclaire. Most likely to run a marathon. Pet peeve: people who put anchovies on their pizza.

Brian Primrose. Most likely to be in the news. Pet peeve: people that spit out their gum on the sidewalk.

What they didn’t mention in the year book is that Mary’s training for the marathon would go on to include chasing the pizza delivery guy after she found anchovies on her pizza, and that Brian would be in the news for beating up his brother-in-law after he spit out his gum and Brain ended up stepping in it. Melted, sticky gum at the bottom of your shoe? Yeah. Not cool, Brian’s brother-in-law.

Personally, I don’t really have a pet peeve. I’m more of a live and let live kinda gal. At least that’s how I’ve always seen myself. And then *this* happened …

Last week I left the office and decided to stop at the grocery store on my way home. I pulled into the parking lot and because I was speaking with my mother on the phone at the time, I parked then sat in my car while my mother and I finished our conversation.

(It’s not a pet peeve but sometimes I see these people talking on their phones while shopping and I think, WHAT IS SO IMPORTANT THAT YOU NEED TO TALK NOW??? I don’t want to be one of those people.)

While I was sitting in my car, I was watching (but not really watching) a lady as she loaded her grocery bags into her white Volvo. Then … THEN … I saw her open her car door and climb in, LEAVING HER GROCERY CART IN THE MIDDLE OF THE PARKING LOT.

That’s when I realized that … boy-oh-boy, I DO HAVE A PET PEEVE.

“Hold on, mom,” I said into my phone as I got out of my car and walked over to the lady about to drive away. She stared at me through the window as I indicated that I wanted to speak to her. She was hesitant.

“Who is this crazy lady blocking my way?”

I could actually see her thoughts.

After what felt like 30 years but was probably more like four seconds, she rolled down her window.

“So, you’re just going to leave your shopping cart here for the wind to smash it into someone else’s car?”

“That’s not a real question,” I said, interrupting her. “But this is. You couldn’t walk the 15 steps to put it over there?” I asked as I nodded towards the cart coral. (Or whatever it’s called.)

“Yes. Just leave it. I’ll put it away,” she said realizing that SHE GOT CAUGHT.

“Never mind,” I said. “But remember this. Karma’s a bitch and don’t be surprised if one day the wind pushes a cart into *your* car because someone else was too lazy to put it away.”

And with that I walked away with her cart.

So yeah. Apparently, I *do* have a pet peeve.

###
Get notified when new posts are available by subscribing to this blog. How do you subscribe? I thought you’d never ask. Just scroll back up and enter your email address in the subscription box in the sidebar. Or you can follow this blog with Bloglovin.