You are here: Home / mom adventures / Woman or dragon slayer? Oh, single mom. That explains a lot. Post 3 of a series. 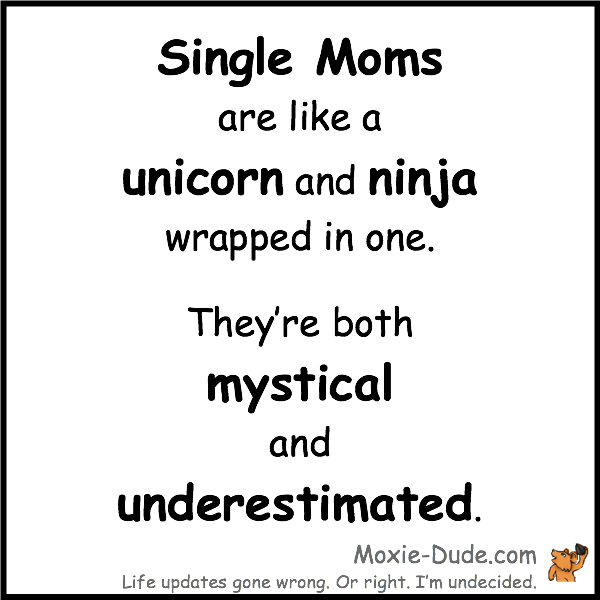 And so we meet again, awesome readers.

When it comes to our kids, we all have bragging rights. They do something awesome, we tell our friends and colleagues about it. But do we tell the whole story? Most often, not.

My kid got an A on her science project.

After putting her to bed, I stayed up until 2 o’clock in the morning to finish gluing all the pieces together.

My son made supper last night. I don’t know where he’s learning to cook … certainly not from me.

I spent the rest of the evening cleaning up the kitchen, including the milk that got spilled in the fridge.

The baby has been sleeping through the night since she was a month old.

Thank GAWD! Because I’ve been taking on freelance projects to make ends meet.

You see where I’m going with this? I blame guilt. We often get so wrapped up in our own guilt, that we forget to mention the good stuff that we do.

I thought twice about sharing the following story because to me, it feels ridiculous. Remembering the extent that I went to find things to do with my kids that didn’t cost money makes me wonder if I suffered from borderline absurdisitis.

But after speaking with my daughter (now in her 30s) and getting her perspective, I realize that while I recall the following with guilt because I couldn’t afford to give my kids what I would have liked, my daughter remembers it with a sense of fairy dust magic. Who knew?

And so, it is with my daughter’s encouragement that I share this memory …

When my girls were young – six and three years old – we lived in a third-floor apartment on the less-than-affluent side of town. There was more concrete than grass and I wanted nothing more than to give my kids magical days at the amusement park or take them to the latest Disney movie. I was very good at shaming myself for not having the money to do any of these things.

Taking the bus to the park or going for walks on sunny Saturdays was a given. But some weekends were sprinkled with random acts of rain from Mother Nature. Holding two young children hostage in an apartment for an entire weekend sounds easy now that the iPad and video games have been invented but back then, it was a challenge.

This particular memory takes place on a Saturday morning and it started with my girls fighting out of boredom. What to do? What to do? To distract them, I told them to get dressed because I had a surprise for them. The screaming stopped, replaced by the pitter-patter of small feet running into their bedroom. Boredom had just been replaced by excitement.

“A SURPRISE? What is it?” They asked as I helped them put on their raincoats.

To be honest, “this secret surprise” was even a secret to me.

Equipped with umbrella and anticipation, what I remember most about our walk to the bus stop was the dimples on my girls’ faces.

“Come ON, mommy.” We couldn’t get to the bus stop fast enough.

They were quiet on the bus. I knew that their imaginations were conjuring up visions of grandness. A pony? A rare and special trip to the toy store? WHAT COULD IT BE?

Every once in a while, their beaming faces would look up at mine. Without words, I would encourage them to be patient. Somehow, I’d learned to make my eyes twinkle. I was in possession of a secret and it was a special secret just for them.

To this day, I believe I deserved an academy award for that one. What was I really thinking? “Where the hell am I going to take them???”

I only had enough money for our return bus ride, and although the rain had stopped, it was still grey and wet. Not the ideal day for practicing cartwheels at the park.

We were headed in the direction of downtown Montreal and as I noticed the distant cross of Saint Joseph’s Oratory peek out of the city’s mountain, it suddenly dawned on me that entry into this majestic and historic temple may be … well, free. AND could even feel like a magical visit to a castle. Maybe. Perhaps.

As we got off the bus and started walking towards our surprise, the girls begged for me to tell them where we were going. The funny thing about kids is that while they love surprises, the anticipation is torturous. OMG I was torturing my kids! (Yes, that was guilt speaking.)

And so to amuse them, I told them a story about a castle. The tale unfolded one sentence at a time, even to myself.

While I managed to invent a story that captured their attention, part of me (actually, most of me) wasn’t even sure that our destination would fulfill their expectations. I could only hope.

From afar (and by afar, I mean a short walking distance for tiny legs), the “castle” was enough to widen both smiles and eyes. It was grand. It was mysterious. IT WAS THE CASTLE FROM THE STORY.

We climbed the many steps to its magnificence until finally we were inside. At first the girls were intrigued, craning their necks like curious geese.

It wasn’t long though before the intimidation of an imposed silence morphed into boredom. They didn’t speak it, but I could see it on their faces. The magic had disappeared and so had their dimples.

Driven by my fear of disappointing them, I brought them outside where we could talk freely without the stern looks from the more serious visitors. Looking around at the grounds and architecture, I suddenly realized that all the nooks and crannies outside had more potential than would meet the average eye. This is when the idea hit me.

Taking a wide-legged stance, and in my most animated, badass, superhero voice, I said, “Take out your swords, girls!” And with an exaggerated arm movement I removed my own invisible weapon from its pretend sheath. “We have dragons to slay here!”

Anyone looking would have seen a young mother and her two daughters jumping puddles in the rain and poking the air with extended arms.

But what we saw …

We were dodging giant dragons by taking cover under arched passageways made of medieval stone. Our mission? To save the castle from the dangers of a dragon attack.

The rain? Oh. That’s how we got our superhero powers.

Remembering those days, when my girls were so young and still mine, makes me realize that while I was busy letting guilt consume me, something special was also being created: memories.

And the best ones didn’t cost a penny.

To read the other posts from this series: